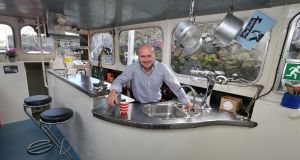 Sam Field Corbett on the ‘Laura Lucy’: he suggested a ‘floating village’ to the DDDA which would be fully accessible to the public. Photograph: Joe O’Shaughnessy

No mortgage, no exorbitant rent, no property tax, no doors to slam. With an overheated rental market and an acute shortage of social housing onshore, the alternative on water should seem like a practical option.

That was Sam Field Corbett’s theory when he wrote to the then minister for the environment Alan Kelly last year, suggesting that a 960-bed cruise ship berthed in Dublin Port could be a better way to approach the accommodation crisis than modular housing.

He had made a similar presentation to the Dublin Docklands Development Authority (DDDA) some time back, suggesting a “floating village” which would be fully accessible to the public and which would offer both accommodation and services, ranging from cafes to community and healthcare centres.

“I’m not sure that they took me seriously,” says Field Corbett, a master mariner whose company, Irish Ship & Barge Fabrication, specialises in design and restoration of vessels such as the MV Cill Airne which is now a restaurant and bar on Dublin’s river Liffey.

“The critical point I was trying to make was that a ship of this type should not be perceived as some sort of ‘gated community’,” Field Corbett says. “It has to be a floating extension of the city, fitted out to a very high standard which means it is much more than a short-term solution.

“When I made the pitch to the DDDA I enjoyed the thought of offering affordable accommodation and workshop spaces to citizens financially excluded from the development of the docklands at the time.

“If you go to any other country in Europe – be it the Netherlands, France, Belgium or just across the water in Britain – living aboard is seen as a very viable option. And it is only going to become more acceptable as population expands and sea levels rise with climate change.”

Whether it is the boutique boat hotels in Copenhagen or the floating bookshops and teashops on London’s Regent’s Canal, there is a far more enlightened approach to using waterways in almost every other country in Europe.

Dublin’s Grand Canal basin and several other areas on the inland waterway network, including Hazelhatch, Sallins and Lowtown on the Grand Canal in Co Kildare, are locations for a small but growing number of “live-aboards”, but the option on marinas or in ports is almost non-existent, partly due to berthing fees.

“But there’s a romantic notion to it which belies the reality,” he says. “That reality means dragging a long hose to get potable water, dealing with emptying a chemical toilet or carrying a camping gas cylinder some distance in the middle of the night.”

There are also issues such as moisture, which requires constant heating to combat, maintaining moorings and dealing with unwanted visitors of the four-legged kind.

Waterways Ireland, the cross-Border body which is responsible for more than 1,000km of an inland network extending from the lower Bann, the Royal and Grand canals, the Shannon-Erne waterway to the rivers Barrow and Shannon, says that it wants to develop living aboard as an option here. It says this is one of the reasons it is supporting upgraded legislation as part of the Heritage Bill 2016.

The controversial Bill, which had reached the Seanad before the general election, updates a number of pieces of legislation, including the Wildlife Act 1976, the Canals Act 1986 and the Heritage Act 1995.

“Currently, we have a very limited extended mooring permit for one year only, at a cost of €152 annually, which has to be used with an initial permit costing €126,” Waterways Ireland spokeswoman Katrina McGirr says.

“We’d like to be able to regulate the sector, so that we can provide a different level of service, including electricity, water, lighting and refuse collection. We know there is a demand for it.”

She says it has been several decades since prices changed, and Waterways Ireland is seeking an increase to €160 for the initial permit, with a flexible price range extending up to €3,500 annually for houseboat use.

“We want to see the Grand Canal basin becoming more active, and we have just appointed a development manager for this,” McGirr says.

She says it currently has 20 extended permit holders on the basin and a waiting list of “at least double that number.”

The IWAI is arguing for an updated and dedicated Canals Act which “puts user requirements, tourism development and local communities at the centre of the regulations”

Joe Treacy, who is an extended permit holder living for part of the year on his barge, 4E, acknowledges that there are “very mixed views” about the proposed legislative changes.

His barge, which was formerly a Grand Canal Company delivery vessel dating from 1895, is currently in Dromineer, Co Tipperary on Lough Derg. He left Leixlip in April and took several months to get to the Shannon via the Grand Canal “by choice”, as he stopped off at several events en route.

“It’s a lot easier now, but a canal bank can be a lonely place in winter if you have a health issue or you are trying to repair a boat on your own,” Treacy says. “At the same time, insurance is very manageable, and Waterways Ireland is extremely supportive.”

Mary McInerney, a chef who opened a “boat-el” on a 29m barge on the Shannon-Erne waterway earlier this year with her husband Jorn Bjerknes, has been living happily on the water for the past seven years.

“It can be expensive to get a nice houseboat, spending €160,000 for a good second-hand one,” McInerney says.

“At the same time, you can save on other costs. We run our central heating off an invertor,we have fresh water wherever we go, a pump-out system provided by Waterways Ireland for the toilet, and its staff are down in 20 minutes if we have a problem.

“The organisation keeps the locks beautifully, and I believe you have to be prepared to pay for a good service.

“We move up and down the Shannon-Erne system on Froya,we have been to several arts festivals already, and as far as I am concerned, there is nothing you can’t do on board. I love going down the Shannon sitting in a bath with a glass of wine . . . ”

Lockdown was hard, but it kept us closer to each other than we’ve ever been
5

‘Game changer’: Could a €300 voucher transform the lives of Irish children?
9