Our recent survey included the following previously unpublished material on pornography use. Here, therapists and psychologists offers their views on the results 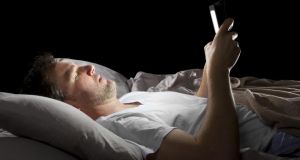 More than one in ten men who responded to The Irish Times sex survey said they used online pornography every day. Photograph: Thinkstock

The Irish Times sex survey was conducted on irishtimes.com over the course of a week in June 2015. A total of 12,639 participants completed the survey, with 12,134 valid responses used in the follow-up analysis.

Here, therapists, counsellors and psychologists give their views on the results of the survey that related to pornography use.

“Pornography has become ubiquitous and I think we are at risk of becoming complacent about it. It really has the potential to be harmful for some people,” says psychotherapist Trish Murphy.

Nine out of 10 respondents who use pornography said they typically did so alone. Women are more likely to watch it with a partner, with two in 10 women pornography users saying they would typically watch it with someone else, compared with just 4 per cent of male users.

Nicola Fox Hamilton says “some research shows that when couples use pornography together they increase their frequency of having sex, are less bored with sex and are more open to experimentation. However . . . the more one partner uses pornography by themselves, the greater the dissatisfaction of the other.”

Just over four in 10 (41 per cent) respondents who have used pornography believe they have learned about sex from it. Male users aged 17-24 were the most likely to say pornography was instructional, with 54 per cent saying they had learned something from watching it.

Teresa Bergin believes that “there can be some instructional value in pornography, especially for people who have received little or no sex education or have not had much sexual experience. However – and this is crucial – pornography teaches nothing about sexual or emotional intimacy, or about how sexual relationships develop.

“There is a real risk now that younger men’s view of a sexual relationship will become sex-centric.”

Teresa Bergin adds: “Pornography most often affects the man’s own expectation of himself. It emphasises the perfect body and performance. I frequently see younger men who have bought into these unrealistic ideas about sex leading, for many, to confusion, anxiety and a sense of inadequacy.”

Dermod Moore is concerned that a third of women say pornography use damages relationships. “This should be taken very seriously, and calls for a far more honest debate about pornography, not only in public discourse, but in the privacy of those relationships.”

Teresa Bergin says she was “somewhat surprised” by the figures. “In my experience, women generally react quite negatively to their partner using pornography without their knowledge or participation. The anxiety, feeling of betrayal and incessant self-doubting that can stem from this is very distressing."