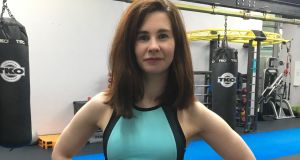 Áine Ní Laoghaire: 'For anyone keen to try HIIT, stick with it – no matter how tough it may seem to begin with.'

I’m a yogi and have been practising yoga for the last decade. About 18 months ago, a friend of mine suggested we go to a HIIT class together, and even though I had never even heard of high-intensity interval training before, I agreed to go along.

As an actor, being comfortable in my body and feeling confident is vital, and I had been feeling out of shape. Word of warning – never eat less than two hours before a HIIT session! Thirty minutes may not sound like a lot, but it’s as intense a workout as you’ll experience.

We squat, deadlift, work on our core and use weights to build strength, with the guidance of our personal trainer, Steven. I really struggled the first time I went, and even now a year and a half later the class is tough work.

I’ve kept going because HIIT is goal focused, which I love. I’m rehearsing for a show in The Mac in Belfast at the moment (It’s Getting Harder And Harder For Me by Alice Malseed) so it’s great to have a set workout that I can do while I’m tight on time, too.

My body has completely changed since I started training – I look and feel stronger and it’s even improved my yoga practice, giving me more balance and power in my poses.

For anyone keen to try, stick with it – no matter how tough it may seem to begin with.

Áine Ní Laoghaire is a theatre and television actor

Coronavirus craft: ‘The virus is so beautiful and so sinister’