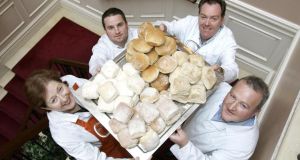 The Waterford blaa, a soft, floury white bread roll that traces its origins back to the arrival of the French Huguenots in the city in the 1690s, has been awarded Protected Geographic Indication (PGI) status by the European Commission.

The blaa is the first southern Irish food in five years to have gained admission to the scheme, which recognises products whose links to a region make them unique. Clare Island Salmon, Connemara Hill Lamb and Timoleague Brown Pudding already have PGI certification, while Imokilly Regato has Product of Designated Origin (PDO) status. In Northern Ireland, Comber Earlies, a potato crop, and Lough Neagh Eels, both have PGI status.

Registration gives producers protection against imitation, such as the use of the name by products made outside the specified region. The blaa was one of five foods registered today, the others being a French goat’s cheese, Rigotte de Condrieu (PDO), the Italian cheeses Pecorino de Picinisco and Puzzone di Moena (PDO), and a Slovenian cheese, Mohant (PDO).

The blaa is made with a simple white flour, yeast, water and salt dough, and the rolls are traditionally dusted with flour before baking. There are four members of the Waterford Blaa Bakers Association – M&D Bakery, Hickey’s Bakery, Kilmacow Bakery and Barron’s Bakery (waterfordblaa.ie).

Minister for Food Simon Coveney said: “A PGI is a symbol of quality within Europe. This unique, quality product is distinguished by the use of simple ingredients, traditional skills and local knowledge, to produce something that has became a symbol of Waterford and a much loved food of the Waterford people for generations. I hope the achievement of the Waterford blaa bakers will encourage other producer groups to come together and work with my Department to get more products recognised on the EU register. As is visible here, these EU schemes can help to build networks among local food producers and communities to strengthen the rural economy.”

Monster or machine? Everything we know about coronavirus after six months
8

Alys Fowler on love and gardening: ‘Ursula Halligan inspired me to come out’
9