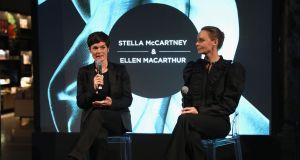 The charity, established in 2010, has pioneered a shift toward a “circular economy” in which raw materials and products are repeatedly reused to reduce waste and pollution.

“The reality is we just need to be a bit more mindful and curious about the way we’re consuming and have a level of responsibility,” she said.

The fashion industry is worth about $2.4 trillion a year, according to the global consultancy McKinsey.

The equivalent of one garbage truck of textiles is wasted every second, and less than 1 per cent of clothing is recycled into new clothes, MacArthur’s foundation said in a report.

“The trajectory for the textiles industry is catastrophic if it continues in this way,” MacArthur told the Thomson Reuters Foundation.

“We need to radically change the way that clothing is designed, used, made and recovered so that we end up with a system that is restorative and regenerative,” she said.

If nothing changes, the fashion industry will consume a quarter of the world’s annual carbon budget by 2050, it said, referring to the emissions the world can make while keeping the global temperature rise at no more than 1.5 degrees.

Fashion must abandon its “take-make-dispose” model, where unwanted clothes are sent to landfill sites or incinerated, and start using non-polluting materials that are designed to last and could save the industry $500 billion, it said.

The report presents a roadmap for creating better businesses and more innovative solutions, said McCartney, a long-time vegetarian who does not use leather, PVC or fur in her clothing.

Clothes also release half a million tonnes of plastic microfibres into the ocean every year, equivalent to more than 50 billion plastic bottles, it said.

“(It) is aligned with our efforts in making sure that economic and social development can happen in a way that the planet can afford,” H&M’s chief executive Karl-Johan Persson said in a statement. – Reuters