From sweet pastels to all frothy confections, here’s what the A-listers wore to the 2020 awards

Little Women star Saoirse Ronan was among those to shine on the Golden Globes red carpet as the stars of film and television gathered in Beverly Hills. Video: Reuters 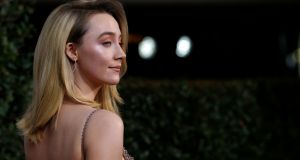 Pastel, puff sleeves, and sparkles – that’s what Sunday evening served up at the 77th Golden Globes, where actors spanning film and television tread the first considerable red carpet of the year, queuing up for the moment in the style spotlight.

If there was an unwritten dress code at this year’s ceremony, it was less Hollywood, more Disney, as tiered ruffles, paler shades of candy and frothy confections reigned supreme over the evening’s fashion choices. Rising stars Sofia Carson, Thomasin McKenzie, and Bel Powley all epitomised the look. With the princess-esque dresses came the princess-worthy jewels, with the comparative presence of gems everywhere. Forget austerity, it was all about superabundant choices of jewellery, from Jennifer Aniston’s 1950s double strand diamond Cartier necklace to Cynthia Erivo’s Bulgari drop diamond collar – bling was most definitely in.

Casting a shimmering, glittering statement at the event was national treasure Saoirse Ronan, who opted for a custom-crafted Celine gown covered in crystals, with barely-there straps, thigh-exposing slit and open back, with cowl-neck detailing. It was was a striking departure from anything she has donned before.

With the sheer volume and range of guests, as opposed to the more select Oscars, the Globes can throw up unexpected fashion choices. This year music-world stalwarts Beyoncé and Jennifer Lopez were nominated, raising the glamour stakes. J-Lo’s meme-worthy Maison Valentino dress was widely compared to a Christmas present across social media.

Apart from Washington’s choice, it was also a red carpet notable for being more modest – in the post-Time’s Up Hollywood era big dress energy took the place of the naked dress. With extra-large frocks were commanding and comfortable, especially Killing Eve star Jodie Comer’s tent-esque emerald green design that was topped off with the detail of the evening – sleeves – particularly of the quirky added extras of the puffy sleeve. The more frou-frou, and statement the sleeve, the better, as seen on The Crown actress Olivia Colman’s Emilia Wickstead scarlet gown, and Once Upon a Time in . . . Hollywood star Dakota Fanning’s Cinderella-inspired confection.

But it wasn’t all saccharine shades and silhouettes. Zoey Deutch opted for a lemon-hued jumpsuit that looked like something the Disney princess Belle from Beauty and the Beast might wear in the present day. Scarlett Johansson went for scarlet, with the Marriage Story actor opting for a fiery-red gown, and Helen Mirren selecting a more Bordeaux red in her burgundy Dior portrait neckline design.

Tailoring was adopted by some including Phoebe Waller-Bridge in a Ralph & Russo tweed two piece to accept her win for best actress in a television series. And taking suiting to a whole new level was Billy Porter in a Alex Vanish white tux complete with feather trim. Also getting the white on the night memo was Irish actor and Fleabag start Andrew Scott, who opted for an off-white blazer and cream bow tie for his Golden Globes debut.