‘London is such a hard place to meet people’ 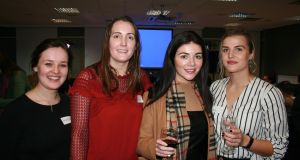 Aishling Murphy (22) from Co Laois, Christine Fitzpatrick (36) from Co Down, Gemma Coyle (26) from Co Armagh and Gemma Hayden (25) from Co Tipperary, who met through the Irish Dolls in London Facebook group.

Despite fears of a “no-deal” crash-out and a continuous stream of Brexit-related headlines, young Irish citizens living in London remain largely unaffected by the Westminster chaos, if a meeting in Camden on Thursday evening was anything to go by.

The London Irish Centre welcomed more than 130 guests to its “Moving to London” event, where people shared their experiences of Brexit, loneliness and a communal love of the city.

Gemma Coyle (26) from Co Armagh, and Tipperary-born Gemma Hayden (25) both moved to London a year ago to seek new opportunities.

“London is such a hard place to meet people,” says Coyle.

“We just thought there’s bound to be other Irish girls over here, but we only met the odd one in a nightclub toilet. We would become best friends and then never see them again, so we started a Facebook group to bring girls together and have a fun time.”

The group, Irish Dolls in London, now has close to 600 members, where girls share tips and organise regular social gatherings.

London has allowed Hayden to earn double what she would in Ireland, but Brexit has the potential to impact her job.

“I’m a nanny for an American family so they have to try to sort out visas. I think it’s just the uncertainty of it all that is frustrating,” she says.

But Brexit hasn’t stopped her from enjoying the city.

“I’m from Tipperary in the middle of the country,” she says. “I couldn’t move home; there’s just not enough to do. I love the buzz and variety of London, especially when the weather is good. I meet people I never would in my hometown.”

Dublin-born Naomi McGettrick (25) was worried about Brexit before she moved to London last September.

“With all the uncertainty I thought I might have to return home after a few months. I considered going to Australia instead but I knew I would prefer London. I asked my sister who was already living over here and she said to just go for it as Brexit isn’t really a big deal.”

A Trinity College social work graduate, McGettrick was enticed over by the career opportunities available in London. Despite applying early, however, it was six months before she was cleared to work as a social worker in the UK.

“I think Brexit slowed down my application because everyone was panicking and renewing their licences before the system changes,” she says.

“It was hard to find work, but the graduate scheme I have now is an opportunity I would never have got in Ireland. Day to day, Brexit doesn’t really affect my life over here.”

Aoife Lynch, a 27-year-old dietician from Galway, has found herself in the middle of many Brexit-related discussions.

“My housemate is working in the Treasury Department on No Deal,” said Aoife. “I’m constantly having to explain to her about how the border works and how people cross it every day because they [the department] don’t know.”

Like so many of the Irish in London, Aoife works in Britain’s National Health Service (NHS).

“Funny thing is, I would actually be earning £10,000 more in the HSE, but there are so few job opportunities there,” she says.

“I’m quite lucky working in the NHS. In healthcare, there is such a demand for workers that we’re protected in our jobs. The Irish have a great reputation in healthcare because we get on with it and work hard.”

Having moved over five years ago, Aoife was in London before, during and after the EU referendum.

“In the media, it’s all Brexit, but the average Londoner doesn’t think much about it. At the end of the day, it doesn’t make too much of a difference to us.”

The London Irish Centre’s new online Moving to London Guidegives practical advice, explaining things like how to open a bank account, find housing and obtain a National Insurance Number. The guide also features a host of cultural and social tips gathered from the experiences of many people who have made the journey before.

Over the next few weeks, Irish Times Abroad will be focusing on the Irish in Britain in detail, taking a look at how the community has changed in recent times, the key concerns around Brexit, and what the future may hold. As part of the project, we are looking to gather the stories of Irish people living across the UK. Whether you moved there two years ago or 50, we’d like to hear about your journey across the water, and how Britain has become home (or not) for you. Click here to share yours.

Generation panic: why is there so much anxiety among millennials?
4