My morning cuppa: A little piece of Ireland in Italy

It’s not the taste, but the liquid comfort of the tea that transports me back home 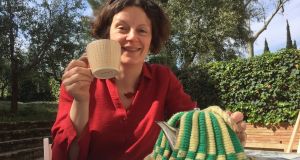 Emma Prunty with her teapot and cosy. “My morning cuppa is my little piece of Ireland”

I’ve finished my last box of teabags here in Italy, and I’ve had to reach for the emergency stash of loose tea at the back of the cupboard, and dig out the strainer. I’ll need to drop a hint to my dad in Dublin who would, I’m sure, be more than happy to stuff 100 bags into a padded envelope. He wouldn’t want to see me go wanting.

You can’t get my type of tea around here in Tuscany, the brand I’ve been drinking almost every morning for the past 24 years since I left Ireland. That sounds a bit mad doesn’t it? Could I not brew up some other tea for my morning cuppa?

I have tried, but I can’t commit to anything else. A friend (English but really half-Irish) suggests I settle for some brands from his favourite good-value online store.

And I did order once from an Irish site, who nicely packaged up my box of teabags in bubble wrap which arrived a few days later. But that’s just like any other plain transaction, there’s no personal touch. It wasn’t sent with love and memories, or stuffed into my own suitcase and brought back.

We all do it. Whether we’ve been away for one year or for 50, every emigrant carries some treat in their luggage back to their current home. It might be milk chocolate, smoked salmon, that relish, a box of bread soda, or the tea.

In my early years away, when travel home was on transatlantic flights, I learned the hard way to give up on the jumbo selection packs of crisps, the 10 types of chocolate bars (plus friends’ requests), the golden syrup and the brown-bread mixes.

Once, on a flight back to New York, I met another Irish woman who told me of a butcher in Queens who would answer to a special knock on the back door and dig out the Irish stuff in the back of the fridge.

In Norway, another Irish acquaintance told me that after decades of bringing back sausages she approached an Irish butcher who let her pass on to her Norwegian butcher the secret mix of flavourings, so he could recreate just for her that sweet flavour with local Norwegian meat.

We have moved on from sausages in this family. “You can only eat Irish sausages when you’re in Ireland,” declare my two Italian foodie daughters.

My emigrant food needs now include goodies from the other places we have lived. These include, but are not limited to, Cheddar and Stilton from the UK; child-friendly liver pate and tins of mackerel in tomato sauce from Norway ; and maple syrup from trips to visit family in Canada. Even at €10 a kilo, the extra luggage charges are worth it.

But tea is special. It holds a central place in Irish culture. Foreign friends at our Wicklow wedding were amazed when the barman produced pots of tea at midnight. It’s the great comforter, unifier, a gift to guests young or old.

I offer it to my visitors now in Italy, who are always surprised when they see Auntie Meldy’s tea cosy plopped on top of the pot.

It’s not just the Irish who feel this way. Most of my British friends abroad keep a stash of their special tea in the cupboard for themselves and special friends. Once I even found Barry’s tea for sale in a tiny live music bar in Oslo, which was run by a friend called Barry.

There’s no perceivable way for me to stop this morning tea habit. Sure, I could drink other teas, but at this stage of my life I wouldn’t even consider changing my loyalty to another Irish brand, which, according to one Irish friend abroad, I should have been drinking all these years anyway as I’m a Dub.

And maybe my preferred tea isn’t even the tastiest one I could be drinking. But that’s all beside the point. It’s the continuity, the tiny little connection I make to my history every single morning when I brew up the Dunnes one-cup metal pot which has travelled to four countries with me.

It’s not the taste, but the liquid comfort of the cuppa. The warmth of it, the un-Italian milky flavour and the deep-rooted sensation that ties me to sitting and chatting in the kitchen of my parents, cousins or friends not just in Ireland but in all the other places I’ve drunk this tea and felt at home, making others feel at home over all these years.

My favourite Norwegian milk chocolate (which friends make sure to bring us when they visit) has a popular slogan: Et lite stykke Norge – A little piece of Norway. My morning cuppa is my little piece of Ireland.

I’ll be in Dublin in the next month of two, so I’ll sort out my own tea – though I might also squeeze in some proper butter this time too.

Emma Prunty has been abroad for over 20 years and currently lives with her family in Florence, Italy. She writes a blog on real life and language at WashYourLanguage.com.