Irish women, ditch your modesty: how to job-hunt, Canadian style

In Ireland we tend not to shout about our ability in the workplace. In Canada you have to sell yourself hard 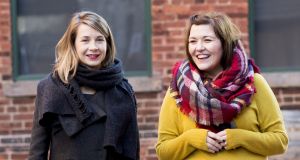 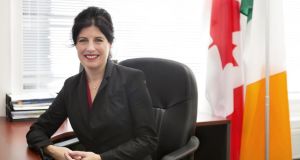 Mary Monks Hatch was pleasantly surprised when she started to hear more Irish voices in Vancouver – on the street, in lifts, sitting next to her on the Skytrain. She had moved from Dublin in 1991, after a whirlwind romance with Paddy, the Canadian man she would later marry.

When she joined the Ireland Canada Chamber of Commerce, in 1994, Monks Hatch realised that she had not met another Irish person in years. But things changed with the influx of Irish who moved to Canada during the recent recession.

“I was thinking, God, this city could do with some life,” she says. “They call it ‘no fun city’, and it was great to hear young Irish voices. And, on the other hand, I thought, It’s a haemorrhage, and it’s terrible for Ireland to be losing all these great young people.”

Until the downturn hit Ireland the group’s focus was on annual Nollaig Na mBan lunches, golf tournaments and a book club.

“The network became very concerned about the fate of the young people coming here and wanting to make sure they knew how to go about things, where to find things,” she says. “Everybody pulled together, and it became more consciously a community trying to help people.

The group organised a networking event for Irish newcomers to talk to people who were established in their fields, from engineering to retail. They provided training in writing a Canadian-style résumé and followed up with many of the 100 jobseekers at that first meeting.

“You could call it a mentoring programme, all right,” she says. The Irish Women’s Network has run regular workshops ever since.

Cathy Murphy, executive director of the Irish Canadian Immigration Centre in Toronto, has first-hand experience providing outreach to the wave of new Irish in Canada. The centre, which helps with work permits, residency requirements, emergencies and employment, opened its doors in 2012.

“When we opened we were actually slammed, and that was a huge period of immigration,” says Murphy. The main group at the time was young professionals in search of job opportunities.

To put it in perspective, 500 people left Ireland for Canada in the year to April 2010, according to the Central Statistics Office. In the 12 months to April 2015 that number was 7,700.

Murphy says things have slowed down a bit since then. But she expects Irish immigration to remain strong, because of the weakening Australian economy, increasing restrictions on the J1 visa programme in the US, and the impact of Brexit.

Many young Irish in Toronto find their first jobs through friends they meet on the GAA pitch and in pubs, and that now includes women, she says. The number of female athletes has rocketed in recent years. Five or six years ago there was no camogie team in Toronto; now there are senior and junior teams, because so many women want to play.

“These women are young leaders, because they are shifting the demographic of the GAA,” Murphy says. “You’re seeing these women now on the board of the GAA in Toronto, which is also fantastic.”

Young professional women, particularly in the financial and real-estate sectors, are becoming more involved in the Ireland Canada Chamber of Commerce, a “quite traditional” business networking organisation.

“We’re seeing more professional young women sitting on the board as well,” Murphy says. “We have nine altogether on the board, and of those nine four are women.”

That is in line with the findings of a Government-funded report on the needs of emigrants, published by the Clinton Institute at University College Dublin in 2014. The report noted “the emergence of a young, female professional element in the Irish emigrant communities” and the opportunity to “support the development of diasporic networks for female professional development”.

Business professionals are mentoring new arrivals, particularly in Toronto. Gemma Griffin is one of the mentors. Since arriving, in 2009, she has worked her way up from an administrative position to senior human-resources manager at a large financial institutions. She joined the Ireland Fund of Canada young leaders group and volunteers with the Irish Canadian Immigration Centre, both of which allow her to support new arrivals.

“Working with the young leaders group gave me the opportunity to give back to young women coming from Ireland, who a lot of the time would follow a very similar path to me: be very qualified in Ireland but come here and, from a simple, basic need of having to feed yourself, take an admin role or a role in retail that’s not necessarily on their career path,” Griffin says.

“A lot of the work I’ve done with other professional Irish women has been working through how they sell themselves. As a culture we don’t tend to oversell ourselves, but here you’re competing against people who are not afraid to. It’s about how you speak to your skills, background and experience and translate that into something meaningful in Canada.

“A lot of the time your skills are global,” she says. “But how you articulate them in a certain country or industry is often a barrier to people getting into the career they want.”

Technology has allowed Irish emigrants to connect in a new way: online via Facebook groups such as Irish and New in Toronto, which has close to 11,000 members, with posts about apartments, events and jobs.

Sinéad O’Neill started CraicTO, an online magazine for Irish women in Toronto, because she missed “having the chats” with her sisters and close friends at home in Co Tyrone. But she also wanted to give the kind of advice she would have found helpful when she arrived, in 2013.

O’Neill writes about everything from her struggles to apply for permanent residency to finding a cheap flight home for Christmas. A particular focus is where to find Irish goods and businesses in the city.

One of the businesses featured in CraicTO was the Irish Design House, a shop opened by Sinéad Clarke, a newcomer, two years ago. Clarke sells handmade Irish products alongside her own clothing line, called Fada. An attached workshop is home to her sewing school, the Green Seam.

Although she has a solid Canadian customer base, Clarke says the Irish community found her shop through online channels such as Facebook and CraicTO.

Along with knitwear and crafts, Clarke has a tuck shop full of Irish snacks. She now has loyal Irish customers who know it’s a place they can buy Irish products. “It’s nice when you’re away from home,” she says, “to have some familiar bits and pieces.”