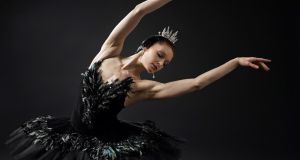 Many ballet companies perform Swan Lake with a mix of excitement and trepidation. If successful, the century-old ballet classic can launch their artistry and reputation to the next level. It also makes deficiencies difficult to hide.

Given its limited resources, Ballet Ireland tackles the challenge with perseverance. During the past decade the company has grown measurably in its number of dancers and quality of productions, and it reaches a new level of artistry with this show.

Ryoko Yagyu as the swan queen and Michael Revie as the prince offer the strongest portrayals, rarely wavering in how they conquer the four-act ballet’s demanding roles. The corps de ballet, all feathered in white tutus, also remain true to the classic vision of identical swans mirroring each other and gliding around the lake. What the corps lacks in numbers it makes up for in energy, buoyed in the pit by the indefatigable RTÉ Concert Orchestra, dynamically conducted by Gavin Maloney.

The pas de deux in acts two and three anchor this Swan Lake. This is where the fairy tale unfolds as the prince falls in love with the swan in the first duet and is willing to risk everything, even though he mistakes the black swan for his true love. Although Yagyu begins timidly in act two, she develops into a slightly more expressive seductress. In other versions of the ballet the swans are protective of each other, which layers the drama, especially as the black swan deceives the prince. That is missing here, as is any compelling choreography in the more pedestrian scenes in acts one and three. Ballet Ireland remains true to the original interpretation of the story, meaning a lot of pantomiming in the scenes without swans.

In a larger company on a bigger stage, more movement would enliven what appears to be a slow-moving plot as well as some slight miscasting. Still, Yagyu carries the ballet with strength and grace, right until her prince perishes in the lake. Tours nationally