A real tragedy and an epic myth inform a violent young Irish man’s quest for home. It takes a while to get there 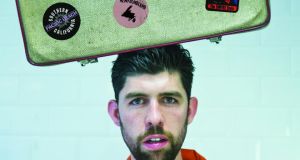 You could never accuse Philip Doherty’s new play for Gonzo Theatre of not attempting enough. It takes 9/11 as its backdrop (opening on the awful event’s anniversary), uses Homer’s Odyssey for narrative inspiration, and makes a supercilious, violent young Irish misogynist its questing hero. Played with uncommon charm by the spirited Rex Ryan, Christy imparts a familiar, imagistic monologue of wild action and inner torment, from San Diego party brawls to his reluctant return to the girl he got pregnant, through flashbacks of formative family trauma, all while stranded among the grounded planes and communal support of a first world refugee camp in Newfoundland.

Director Aoife Spillane-Hinks throws the kitchen sink at it, an energetic melange of multiple role-play, animated visuals and clever sound design. It’s amusing, but eventually fatiguing, as Doherty’s play runs short of incident and starts to choke on descriptive detail. Christy’s ever-thickening observations of evil temptation and familial harmony oversell his transformation into responsible nice guy, as though the makers were trying to convince themselves. The production’s scale and ambition is admirable, but it loses the gravity of 9/11 and the complexity of Ulysses, becoming less a journey of discovery than a picture of maturity long delayed.