Dance in Dublin’s docklands sees potential amid the dereliction

In Mind Your Step, choreographers and dance artists will stage four works along a walking trail in the docklands, highlighting the ‘eerie mix of old, new and stunted’ in the built environment 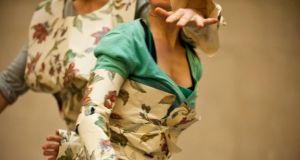 Sometimes We Break, originally created by Jessica Kennedy of Junk Ensemble with her sister Megan for the Tate gallery, which will investigate the idea of belonging and home

Jessie Keenan won’t yield. Walking around Dublin’s docklands, the choreographer refuses to reveal the exact location of her new work, Low_lying. Assurances of off-the-record integrity are rebuffed as she maintains the importance of the act of discovery on March 8th. Then, as part of a two-day event, Mind Your Step, audiences will be led on a walking trail through the docklands, where they will encounter four dance works in different and unexpected locations.

There are rich pickings for these site-specific works. Rambling with Keenan reveals new offices, derelict sites and historic buildings, all abandoned when building and development ground to a halt with the economic downturn.

“What struck me most during the first site visit were the number of facades,” she says. “Wooden hoardings are hiding huge building sites or giant glass windows covering never-used offices.”

This sense of unfulfilled promise hiding behind screens is a strong theme in Low_lying, created with musician Robbie Blake and visual artist Ciara McKeon. It’s just one example of the faded idealism that can be seen around every corner. Peeling real estate posters show clean-cut twentysomethings enjoying a glass of wine or shopping in supermarkets.

“Until relatively recently, the docks provided manual labour and the lifestyle was slower, physical and more earthy,” Keenan says. “These days, life and work seem less stable.” This probably reflects the area’s fractured sense of community and the fact that most jobs involve sitting behind a desk, the products of labour often existing in the cloud.

Potential in the dereliction

Mind Your Step was developed through Léim, a programme of research and exchange initiated by Dance Ireland along with partners in Italy, Cyprus, Spain and Germany. The walking trail – which also includes dances by Fearghus Ó Conchúir, Catherine Young and Junk Ensemble – will be preceded by a symposium that will bring together artists, city planners and local communities to discuss how future development in the docklands can be inclusive and sustainable.

For symposium curator Eleanor Creighton, there is potential within the dereliction. “At places the built environment feels like an eerie mix of old, new and stunted,” she says. “But there are incredible spaces – even if they could do with a lick of paint – that are waiting to be discovered.”

She points to the upturn in the commercial property market within the docklands. “This project is arriving at an interesting time when people are starting to look again at the docklands as more than a graveyard of skeleton buildings, which it has been over the last five or six years.”

Having a conversation about the area’s future is timely, but it needs to move beyond the height of a new building or how a new mixed-use development will be used. One of the symposium’s modules, Dublin’s Docklands: Culture, Community and City Building, will be addressed by Deirdre Scully, a senior planner in Dublin City Council’s docklands office; Betty Ashe, external liaison co-ordinator at St Andrew’s Resource Centre on Pearse Street; and Ríonach Ní Néill, a choreographer with a background in urban geography whose doctoral research was on the development of Dublin’s quays from 1960 to 1994. This disparate line-up will not just offer a range of viewpoints, but allow those different perspectives to feed in to each person’s practice and outlook. It will also be more than a talking shop.

“We want this symposium to agree on a couple of concrete reflections or proposals that will be put forward for consideration in the next city development plan,” says Creighton. “In particular we want culture and dance to be part of that conversation, not as something coming along afterwards when the horse has already bolted.”

So what what can choreographers offer urban planners? “Choreographers and dance artists have a unique sense of space and spacing,” says Giulia Galvan, curator of the performances and the walking trail. “The first patterns of cities were created by the movement of people and only later became clusters of inhabited buildings.”

She recalls how Italian architect Carlo Scarpa used to tell his students that, in order to understand how the paving of a square had to be made, he would go and look at the passage of pedestrians when it was snowing. “These days we possess all the instruments to understand how the city of the future can be best constructed, and the first step of this investigation is to be aware of the space we occupy and of the traces our movement leaves behind.”

Galvan is encouraged by the growing interest in the walkability of cities in order to improve their standard of living. The walking trail won’t just bring the audience from one performance to another, but is an act of choreography in itself.

For Jessica Kennedy of Junk Ensemble, dance artists can change how people view urban spaces. “Once the audience begins to move in space, the piece becomes a social choreography of sorts, which can quietly change the environment. On a more active level, choreographers can shift people’s perceptions of urban areas through participative performance or hijacking the space. The space can be altered entirely to become their own, thereby altering the spectators’ previous definition of the space.”

Sometimes We Break, originally created with her sister Megan for the Tate gallery, will investigate the idea of belonging and home. “Our reason for choosing a disused space is an attempt to portray the shifting sense of belonging and the idea of home,” she says. “Recently, the docklands has experienced rapid change and development, yet seemingly with little association to home. We were drawn to the idea of re- imagining an abandoned, leftover space through visual design, movement and music and to try to make it our home for a short spell.”