Who can keep up with Mark Guiliana?

The New Jersey boy, who has been hailed as the future of drumming, says jazz and electronic music equally informed his style 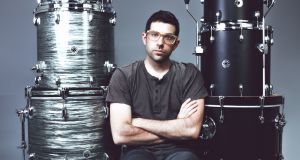 Mark Guiliana: ‘Listening to Coltrane play a melody on the saxophone makes me want to go practise drums’

In the search for the future of drumming, the end of a leafy, pot-holed lane in the midlands is not exactly the first place you would look. But on a crisp autumn day, the unmistakable sound of drummers drumming drifts across the grounds of an 18th-century hunting lodge. It’s American drummer Mark Guiliana giving a week-long workshop, and stick wielders from all over the world have parted with four-figure sums to be here with the guy most other drummers are talking about.

“Here” is Grouse Lodge, a recording studio founded by Dublin impresario Paddy Dunning, where Michael Jackson famously holed up for several months in 2007. REM, Will.i.am and Tom Jones have also beaten a path to this plush Westmeath hideaway, and it’s easy to see why. It’s a compound with pretty high standards: as well as a vast state-of-the-art studio, there are a swimming pool, sauna, bar and acres of secluded grounds to wander in.

But for all these distractions, Guiliana is clearly focused on the task in hand. “It’s about the music,” he says, settling into an implausibly large sofa in the home cinema. “I always say to myself, ‘Why am I here?’ and why I’m here right now is to give these guys a great experience. We’ve been having a great time, and it’s a cool hang, but I’m not here to drink Guinness. It doesn’t mean you don’t have a drink at the end of the day, but we’re here to play music.”

The birth of an obsession

Born in Florham Park, New Jersey, in 1980, Guiliana describes his younger self as a typical suburban kid. His parents were school teachers, not involved in music. A drum kit in his cousin’s basement lit the touch paper, and what began as a hobby gradually became an obsession.

“I was just listening to whatever was on MTV,” he says of his early influences. “So for me it was Nirvana, Red Hot Chili Peppers, Pearl Jam, those guys. Chad Smith [of the Chili Peppers] and Dave Grohl [of Nirvana] were the first guys I could point to and say, ‘That’s what I want to do’.”

His parents sent him for lessons with renowned New Jersey drum tutor Joe Bergamini, who opened his ears to jazz and specifically to Tony Williams, the explosive drummer in Miles Davis’s influential 1960s quintet.

“When I heard Tony Williams for the first time, I was 16 or 17, and I knew my life was going to change.”

But this was the late 1990s, and there were other rhythms in the air, particularly the sequenced grooves of emerging electronic genres such as techno, jungle and drum’n’bass. The integration of these apparently contradictory influences became Guiliana’s mission as a drummer.

“We’re all a product of our surroundings, musically speaking,” says Guiliana. “For most of my life I’ve heard music that’s on a grid, and it’s much easier to embrace it than to try to push it away. The first time I heard Squarepusher, I had a similar feeling to the first time I heard Tony Williams. I had literally never heard anything like that. It just grabbed me. So I investigated that musical world just as intently as I had jazz, and I think it got to a point where they had a nice mutual relationship inside my body.”

But sequencers can do things that a four-limbed mortal just can’t emulate; there just aren’t enough hands.

“That’s why I love it,” Guiliana says. “Often with Squarepusher, I would try to distil the fundamental things that he was doing, but knowing that I would come up short, I would land on this space that’s in between.”

Guiliana has spent the last decade working with some of the more creative musicians on the New York jazz scene, such as singer Gretchen Parlato and bassist Avishai Cohen. It was through Cohen that Guiliana hooked up with one of the undisputed heavyweights of US jazz, pianist Brad Mehldau. Although Guiliana was pretty star-struck at first, the two would jam together whenever the pianist’s schedule allowed. Last year they released Mehliana: Taming the Dragon, a record that has opened the ears of other jazz musicians to that space where electricity and improvisation can co-exist.

“Even at the release party in New York, we just went out and improvised,” he says laughing. “You know, we have this record that we’re launching, and we’re not even playing it.”

In 2014, he set up his own record label, Beat Music Productions, and released two records – My Life Starts Now and The Los Angeles Improvisations – which, along with Taming the Dragon, have raised the unassuming drummer’s profile to another level.

So what is the drummer’s drummer listening to these days? “Most of the time, it’s music from 50 years ago,” he says with a wry smile. “Bob Marley, Art Blakey, every day. On my flight home, I’ll listen to [John Coltrane’s] Love Supreme. Listening to Coltrane play a melody on the saxophone makes me want to go practise drums; it’s like, ‘Wow, how can you get that connected?’ ”

So could he ever see himself as a saxophonist? “I could never stand at the front of the stage like that, because then it really feels like everyone is looking at me. I want to be invisible. It’s not about me, it’s about the music that’s being created.”

But for the man being widely hailed as the future of drumming, invisibility is getting trickier every day. “There are times when I feel better knowing that I’m behind the drums, and I can be in my own world. If I put all my intention on ‘why am I here?’, then, if a higher profile comes, great, but I want it to be at the service of the music.”