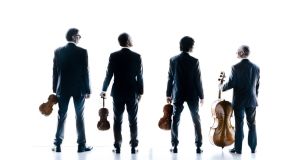 It sounds totally counter-intuitive. But the response of Francis Humphrys, artistic director of the West Cork Chamber Music Festival, to the ongoing pandemic is to increase the number of concerts for the next festival, which is due to run from Friday, June 25th to Sunday, July 4th.

And Humphrys has completely remodelled the shape of the festival. Traditionally, if you had the stamina, it was possible to attend every single one of the festival’s concerts. This year there will be up to three concerts happening at the same time, and for most of the timeslots in the 12-hour-plus schedule – with starting times from 10am to 10.30pm – there will be a choice of two.

Humphrys and his team in Bantry went through the same kind of agony that most arts organisations experienced in 2020: contacting artists, ticket-holders and stakeholders about refunds, cancellations and cancellation fees, and then figuring out how to maintain an online presence in a world where it was an issue just for people to meet, let alone rehearse or perform.

The operation was anything but straightforward. The festival brings together more than 80 artists, and at the time of the 2020 cancellation had already sold more than €60,000 worth of tickets. Ticket-holders were given the option of leaving their money with the festival, getting a refund or putting it towards tickets for 2021.

“People were very generous,” says Humphrys. “And of course the key thing was the Arts Council saying that their funding would stay with us” – even in the absence of an actual festival – “and of course the wage subsidy. All those things made it possible for us to stay in being as West Cork Music.”

In spite of its name, West Cork Music, of which Humphrys is chief executive, doesn’t just run music events. It presents the West Cork Literary Festival (festival director Eimear O’Herlihy) and Masters of Tradition (artistic director Martin Hayes) as well as the chamber music festival. The Arts Council’s decision to allow organisations to retain funding for events that could no longer take place was transformative. “We paid 40 per cent cancellation fees across the board, and also to venues, piano hire, things like that.”

Cast your mind back to the first half of last year. The internet was awash with home-produced performances, often recorded on mobile phones – anything from solo work to Ravel’s Bolero, Beethoven’s Ode to Joy and Mozart’s The Abduction from the Seraglio. Humphrys set out in a different direction and set up concerts in studios and venues around the world – Amsterdam, Chicago, Bremen, London, Paris (the Centre Culturel Irlandais), Cork and Warsaw – most of them using multi-camera setups, and with Irish musicians featured in Amsterdam as well as Cork.

The musicians were all due to have performed in Bantry in 2020, and the prerecorded concerts were streamed during the festival’s original dates. “Basically,” he explains, “we had to go to where the musicians were and see what they could do in the city they were in.”

In order to bring together an audience of roughly the same number as usual we had to multiply the number of concerts by three or four. So that’s what we did

It wasn’t ever going to be possible to reschedule 2020 events lock, stock and barrel into 2021 as, for instance, Wexford Festival Opera has been able to do with incoming artistic director Rosetta Cucchi’s Shakespeare-themed programme. When the 2020 festival was cancelled, Humphrys already had a lot of artists booked for 2021. “Especially string quartets. String quartets tend to need to be booked, like, two years in advance.”

The rationale behind upping the number of concerts was, he says, “moderately logical. We’re in the business of live music, and for a chamber music festival we have to book people in advance. I can’t put that festival together in April or May. My audience is used to getting a programme just before Christmas. That was the target.

“So then the question was what sort of festival? I felt quite strongly that to generate any kind of festival atmosphere you can’t just put on the same festival for 25 per cent of the normal number of people. That was my rationale. In order to bring together an audience of roughly the same number as usual we had to multiply the number of concerts by three or four. So that’s what we did. There will be four venues running and you will have to make choices.”

He laughs as he says, “It’s not a bad thing,” and points to the advantage of having a fall-back for any event you can’t get tickets for.

What was fascinating, he says, “was the enthusiasm of the musicians. They really bought into this. There’s very little of the normal Bantry style, where we bring together musicians for the first time and they rehearse intensively during the festival. There simply wouldn’t be time for rehearsing like that. I wanted them to do more, so the best way to do that was to ask them what they were planning to do in 2021 and say, let’s do that.”

Artistically, this is an upending of the kind of festival Humphrys has cultivated for the last quarter of a century, with musicians mixing and matching in new formations and often performing repertoire that is absolutely new to them. It’s always been a risky and exciting strategy, with the occasional new musical relationship disaster being more than compensated for through collaborations that generate a special spark.

The mix-and-match approach is not entirely absent this year. He mentions Berlin and Amsterdam as cities with especially interesting musicians, and says that one of the unusual repertoire choices of 2021 (Romanian composer George Enescu’s 1940 Piano Quintet, praised for its bewildering but beautiful profusion but never performed in the composer’s lifetime) will be rehearsed in Berlin in advance of the festival.

In general, however,  although the musicians will give more concerts, there’s actually less preparatory work involved because they are presenting familiar repertoire with familiar partners. This paradox explains why the musicians are happy to perform for the same fees as before.

“What is going to cost a lot extra,” Humphrys says, “is extra venue fees, extra production team costs, because that is going to be very intense – clean the venue, brief rehearsal, audience in, next concert, and so on.”

When he planned this year’s festival the arrival of a Covid-19 vaccine was not expected until the second half of this year. So “vaccination will be a game-changer, a real plus. And the other real plus was when Ireland signed up to the international travel traffic-light system. This all seems bizarre at the moment, when everyone everywhere is locked down. But that will pass – says he, confidently... or optimistically.”

The confidence and optimism may stem from the fact that certain final decisions have yet to be made. None of the festival’s masterclasses or other events have been announced, and the online version of the 2021 schedule is described as a “first edition” of the festival. Humphrys says he spent weeks buried in Excel files with his programme co-ordinator and executive assistant, Helen Dawson, working through permutations and combinations of programme possibilities to figure out likely socially distanced attendance levels in order to make box-office projections. And he currently expects to be able to get within hailing distance of the total achieved at the last full festival in 2019.

The new model will involve shorter concerts, mostly of 45 minutes, with longer evening concerts at up to 90 minutes without an interval. With alarming frankness, he admits that “it’s a completely new model and we don’t know how it’s going to turn out. But it seemed to me it was a good stab at putting on a substantial quantity of top-quality live chamber music for a substantial number of people.”

Humphrys has never been shy about pursuing personal enthusiasms in his programming. So this year will see Belgium’s Quatuor Danel perform the complete cycle of 17 string quartets by Polish composer and close friend of Shostakovich Mieczyslaw Weinberg (1919-96); three concerts by Ensemble Vintage Köln of the extraordinary 17th-century Mystery Sonatas by Biber; and cycles of works by Bach, Beethoven, Bartók, Martin and Schumann. But, unusually for Bantry, people who choose Weinberg will have to forego Beethoven or Schumann or Kreisler or Dvorak.

The list is too long to give in full. Whatever way you look at it, the 2021 West Cork Chamber Music Festival is going to be like none other before it.

The first edition of the 2021 West Cork Chamber Music Festival programme is at www.westcorkmusic.ie