The two bright minds behind inspiring music festival in Doolin

Music Minds focuses on music, music technology and the processes of music making 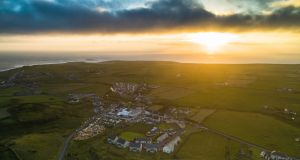 Last January, the musician and music producer Simon O’Reilly and the percussionist and Kíla frontman Rónán Ó Snodaigh played a gig at the Courthouse Gallery in Ennistymon. In the depths of winter in Co Clare, one may not necessarily expect a crowd to turn out for an evening of left-field music.

But they did, and so O’Reilly decided to take things further. The result is Music Minds, a one-day festival in Doolin on January 19th founded by O’Reilly and Peter O’Brien, the events producer behind events including the Another Love Story festival, which is frequently cited as the best small festival in the country.

Music Minds will focus on music, music technology, and the processes of music making, with workshops and gigs. The festival will take place at Hotel Doolin, already home to the Doolin Writers’ Weekend at the end of January, and the Doolin Folk Festival in June.

With the music festival season already bleeding into spring and autumn months, it’s inevitable that smaller festivals will begin to crop up in the off season given the appetite for music-focused communal events in Ireland. The internationally established festival Other Voices, which headquarters in Dingle in west Kerry at the start of December, is something O’Brien references as an inspiration and also proof that festivals can work off-peak and off the beaten track. “Another Love Story started with 150 people,” O’Brien said of that festival at Killyon Manor in Meath, “everything starts small”.

“He rang me up and said, ‘We could really do something exciting down here’,” O’Brien said of the aftermath of last January’s gig. “We developed Music Minds together. It’s based on the life of a music producer or someone in the music business, in the winter, when there’s not a huge amount on, and people like me and other people are setting up for a summer of busyness, and artists are setting up for gigs for the summer. It’s based around getting people away to an inspirational part of Ireland to get some new year’s inspiration for the year to come.”

Audiences are increasingly looking for more unique locations and elevated curatorial experiences in music festivals, especially given how well-travelled Irish music fans are, journeying to festivals around Europe, and also because of how the music-in-a-field format has begun to feel homogenised. From Other Voices to Drop Everything, manor house festival such as Another Love Story to experimental music festivals such as Open Ear on Sherkin Island, Cork, a sense of discovery and pilgrimage is a key element of contemporary music and arts festivals from the attendants’ point of view.

O’Reilly is also looking to events such as the music technology festival Loop, which began in Berlin in 2015 and took place in Los Angeles in 2018. He likes the idea of having something like that in the west of Ireland: “It’s an amazing location. I don’t know why it’s not viewed more as a progressive European location for music. I don’t think we value what we have on our doorstep enough as inspirational.”

Workshops at Music Minds include a pedal board workshop with Alec Browne, a live visual workshop with Mark Hearne and a music documentary-making talk with Myles O’Reilly. With people’s private cultural landscapes populated by TED talk videos and informative podcasts, O’Reilly believes that while the festival programme will obviously be of interest to working and learning musicians, it’s also an opportunity for punters not immersed in music technology to learn about creative processes they may be less familiar with. “You can be interested in something and go on and learn without having to be an expert yourself,” O’Reilly said, speaking from Lahinch, where he lives, “This is more about processes, psychology, technology.”

After a day of workshops, a panel discussion featuring agent and event producer Úna Molloy and others, and a kids’ disco with Donal Dineen, the hotel’s Barn venue will feature gigs from Katie Kim, David Kitt, RSAG and others. The festival could improve its gender balance, with most of the workshops being led by male artists, especially at a time when music festivals are both being criticised for and making efforts at adjusting male-dominated line-ups, but O’Brien and O’Reilly are already looking at expanding the event in 2020.

O’Reilly is particularly excited about the workshop with cellist Alec Brown, “he uses all these trips effects, he’s like Jonny Greenwood [of Radiohead] with his cello. Hearing him talk, you don’t have to be into cello, it’s just interesting.” Eamon Doyle will also present a photographic audiovisual exhibition.

With Electric Picnic 2019 selling out before the line-up was even announced, and the success of the new midsized-festival All Together Now in 2018, along with Body & Soul, Longitude, Forbidden Fruit, and several more around the country, as venues and clubs close, it appears as though there’s no abating the hunger for music festivals.

“I’m 10 years putting on events and it’s never been so insatiable, the appetite,” O’Brien said, “the music scene has become just flooded with festivals and events, but people are going to them . . . Festivals do inspire people the most. They’re a big hit of people together, and if they’re done well and curated properly, you can really have a very full cultural whack, and that brings inspiration to people.”

Tickets to Music Minds are €35 for a day pass, €20 for an evening pass, and €75 for a family pass for two adults and two children. musicmindsfestival.ie