The real Rod Stewart stands up 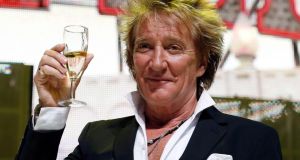 In a damning indictment, Greil Marcus once famously wrote: “Rarely has a singer had as full and unique a talent as Rod Stewart; rarely has anyone betrayed their talent so completely.” It’s some measure of Stewart’s character – he’s one of the most likeable rock personages you could ever hope to meet – that he found himself concurring with Marcus’s assessment.

There are two Rod Stewarts, one a genius, one a clown. The former is one of the great male vocalists of all time, rock’s answer to Frank Sinatra. Take one listen to the still coruscating Every Picture Tells a Story album (very few can interpret a song as well as Stewart) and pause also to consider his songwriting talents. This is the man who wrote Maggie May, Stay With Me, The Killing of Georgie and You Wear It Well.

But there’s also the “Elvis goes to Vegas” Rod Stewart, the skin-tight leopard-skin wearing, tartan-scarf-waving, peroxide cabaret cartoon who moved to LA and only emerged from his Jacuzzi to record dross such as Do Ya Think I’m Sexy? .

That Rod is still with us. In latter years he’s squandered his talent by yawning his way through a series of “American Songbook” albums and doing what only Michael Bublé should do – recording an album of sickly Christmas songs.

But, after decades of being Missing in Action, Presumed Dead, the Rod of The Jeff Beck Group and The Faces is peeking out at us again. This week Stewart scored his first No 1 album in 34 years and the songwriter in him is back. He has co-written all of the songs on his current Time album.

But where was this Rod for the past close on 40 years? It can’t have taken that long to realise that: once you’re over 60, it’s perhaps time to hang up the skin-tight leopard-skin leggings; that recording songs that Right Said Fred would turn down on the basis of lyrical inanity isn’t good for one’s artistic legacy; and that there’s only so many “lushly orchestrated” covers of other people’s songs before you’ve turned into bad dinner-party backing music.

Granted, Time is no Every Picture Tells a Story , but it’s a welcome act of repentance. Stewart dredges up his painful past on Brighton Beach . The autobiographical song is about getting his girlfriend pregnant when she was 17 and the heartbreak of giving up his first daughter for adoption and trying to rebuild a relationship with her when she had grown up.

On It’s Over , Stewart pleads for compassion from a wife who is intent on divorcing him. The song is based on his second marriage to Rachel Hunter. Though he found their divorce devastating, he still loved her: “All the plans we had together, up in smoke and gone forever, poisoned by the lawyer’s letter . . . don’t forget our children’s future.”

Remarkably, for someone who always appears to be on the bold and brash side of over-confident, Stewart stopped writing songs for decades because an executive at his record label (who had never written anything in his life) told him his new tunes “were shit”.

You forget sometimes how brittle truly great musicians can be, how easily their confidence can be knocked and how they just slink away to record covers of songs that have already been hits as a commercial safety net.

It’s great to have the old Rod back. But what we really need now is a Faces reunion.

The misunderstood, useless and brilliant artists of the Irish diaspora
10