Patrick Freyne on Eurovision 2017: Kiev locals on ‘cleaning the past’

‘Eurovision is just entertainment, but it is important. It shows life is almost as usual’

Brendan Murray will perform 'Dying To Try' at the Eurovision Song Contest in Ukraine. The ballad was co-written by Swedish songwriter Jörgen Elofsson and British songwriter James Newman. Video: RTÉ 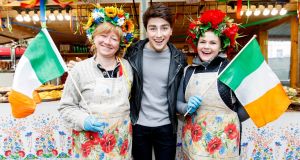 Irish Eurovision hopeful Brendan Murray with some local fans out and about in Kiev, Ukraine, ahead of the Eurovision semi-finals starting from Tuesday night. Photograph: Andres Poveda

The Ukrainian novelist Andrei Kurkov, whose Putin-baiting satires have twice been banned in Russia (first in 2004 and again since 2008), sits in a Kiev cafe contemplating the oddness of having a Eurovision village by the site of the 2014 revolution at Maidan square.

He’s seen odder things. He’s currently planning a surreal novel about the war in the Donbass 800km to the east, which, he says, Kiev citizens (and the western media) barely mention any more.

“Yesterday, one soldier was killed and nine wounded,” he says. “Officially. Unofficially… nobody knows.”

Even with the Ukrainian government forbidding entry to Russian contestant Yulia Samoilova for playing an unauthorised, illegal concert in Crimea, and last year’s Ukrainian entry, Jamala’s 1944, containing thinly veiled references to contemporary Crimea, he doesn’t think most Kiev residents will watch the Eurovision with geopolitics in mind.

He laughs gently at journalists like me who read too much into things. He met an Austrian reporter who insisted that a simple advertising slogan was “militant”.

“The Eurovision is just entertainment,” he says. “But it is important. It shows that life is almost as usual [in Kiev]. It’s one of very few bits of good news for Ukraine - and the country badly needs good news.”

Off Maidan square sits a big stage and white dome-like tents – an area filled with music, art and food and populated by smiling families.

Unlike in Stockholm last year, however, there are metal detectors at the entry to the Eurovision Village and there are police everywhere – reportedly 16,000 of them.

At one end of Khreshchatyk Street sits the “Arch of Diversity”, a Soviet-era monument recently repainted in rainbow colours but left unfinished because of complaints and intimidation from a small far-right group.

A young woman, Alena Matkovsky, sighs when I ask her about this. “That’s because of older people,” she says. “They grew up under dictatorship.... I think when the last guy who lived in the USSR dies, Ukraine’s mind will have changed. We will be Europeans.”

Younger Ukrainians very much see their future as part of Europe, says Kurkov, at least outside of the eastern parts of the country. Matkovsky says the Eurovision is important “because we want to show European people that we might be poor but we are a European nation and can do things at a European level.”

She very much sees Europe in opposition to the Soviet past. She enthusiastically recalls the tightness of last year’s Ukrainian win over the Russian runner-up.

“But Eurovision shouldn’t be too political,” she adds.

Arthur Mine is running a food stall. He also believes Eurovision is important for the city.

“It’s part of Euro-integration,” he says. “I’m not a fan [of Eurovision] but I think it is a big deal for Kiev. I wish it could be here more often. The city looks so much better.

“It’s like when your apartment is messy but somebody is coming over so you clean it up really quickly. I mean, it goes back to normal afterwards, but at least for a while it looked great.”

It took a long time for the signs of revolution and violence to be cleared from Maidan square, says Kurkov. He thinks it’s probably good that the Eurovision Village is in the same space.

“It’s like a bit of cleaning of the past,” he says. “It’s like in orthodox religion - if something bad happens in a place you call a priest and he does a ritual and says, ‘Now it is clean, it is ritually clean.’” He laughs. “This is kind of another cleaning, but by Eurovision.”