Past tension: the eternal battle between old and new music 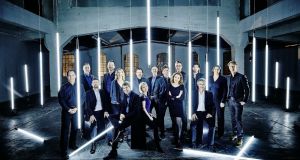 The New Music Dublin festival, which ran from Thursday to Sunday, has a naming problem. It’s not a problem of the festival’s making, but it’s a problem nevertheless – and it’s one that seems to go back about two centuries.

Two years ago, at a public musicology symposium held at the National Concert Hall, the keynote speaker, Christopher H Gibbs of Bard College in New York, proposed the commemorative concerts held after Beethoven’s death as the starting point of the kind of musical programming that we take for granted today.

Up until that time in the 1820s the focus had been on new music, to the point that the 18th-century Academy of Ancient Music – after which today’s period instruments group is named – had to identify itself in its name as being about old rather than new work.

The programming that developed after Beethoven’s death, as the style of concert life we know today came into being, mostly looks backward. Its focus is overwhelmingly on the great works of the past. It’s that focus which set up the battle for attention with the great historical canon that composers continue to face today.

A century later the 18th-century norm had to be turned on its head. The International Society for Contemporary Music (ISCM) was founded in 1922, and its still-active festival – today’s ISCM World Music Days – identified itself the other way around, by its focus on the new rather than the old.

Euphemisms emerged to deal with the fact that much of the music involved was not exactly popular with the public. Alternatives to contemporary music included 20th-century music and new music. Dublin’s first foray in the field, a Festival of 20th Century Music, ran from 1969 to 1984.

But neither description was entirely accurate. When aficionados talked in the 20th century about 20th-century music, they often had in mind an aesthetic stance that was overtly exploratory rather than conservative. From this perspective John Rutter and Karl Jenkins – to take two popular names – would never be seen as contemporary nor, in the earlier years of their careers, as 20th-century.

Nor would they qualify under the euphemism “new music”, which in the real world embraces a lot of music that is not new at all. “New Music Dublin 2019,” says festival director John Harris in his welcome note in the festival’s brochure, “does exactly what it says on the tin: It really is all about the New.”

Oh no it isn’t. He may be correct about the 22 first performances which include 18 works actually commissioned by New Music Dublin. But he ignores the fact that at least another 18 pieces are more than five years old, with the majority of them being from the last century.

Is this a problem? Musically, no, but the name certainly is. In the wider world of classical music, new music has a bad rep. A lot of concert-goers find the prospect of new work off-putting. They may not know much about it, but they know they don’t like it.

Complication and the lack of immediate appeal are often cited by people who have turned their faces against new music. They are right if they want the sounds of the present to allow a seamless fusion with the past. But Jennifer Walshe’s The Site Of An Investigation for voice and orchestra, which opened New Music Dublin 2019, is as much an expression of her immediate concerns as Beethoven’s Ode to Joy is of his.

Slice through a day’s worth of news/science/social media pages on the internet and through the history of music, mix the outputs in Walshe’s well-stocked brain, put her in place as the attention-seeking soloist, and you’ve got some idea of the piece’s world.

David Fennessy’s Conquest of the Useless, for orchestra, electronics (Peter Dowling), actor (Aaron Monaghan), mezzo-soprano (Jennifer Johnston) and electric guitar (the composer himself), is the result of an obsession with Werner Herzog’s 1982 film Fitzcarraldo, itself an obsessive recreation of the real-life transport of a steamship over a mountain. Nineteenth-century opera and the recorded voice of Caruso (extended and layered with itself by the electronics) permeate a work that generates the excruciating tension of relentlessly pursuing an almost impossible goal.

Jean Deroyer’s sympathetic handling of the RTÉ National Symphony Orchestra contributed greatly to the success of both works, which were given on a stage where Herzog in person held court just two years ago.

The other two main-stage events seem by comparison either pallid (a Kaija Saariaho/Louis Andriessen double bill from the RTÉ Concert Orchestra under Robert Houlihan), or vapidly pumped-up (a Michael Wertmüller/Frank Zappa double bill from Ensemble Musicfabrik).

The final early evening concert, given at St Ann’s Church by Chamber Choir Ireland under Grete Pedersen, offered works by Louis Andriessen, Anne Boyd, Ørjan Matre, Deirdre McKay, Rhona Clarke, Kaija Saariaho and Maja Linderoth. It was at once a sheerly beautiful immersion in choral sonority – the most gorgeous singing I’ve heard from the choir in quite some time – and a mainstreaming of those unorthodox vocal techniques that composers began exploring in the 1950s and 1960s. There was nothing off-putting about this save the new music branding.

Highlights among the smaller-scale events included Ensemble Intercontemporain’s performances of Louis Andriessen’s Woodpecker, a percussion work that delivers on its title, and Javier Álvarez’s Temazcal, for tape and maracas, co-ordinated in a way that made the performer look like a puppet of the electronics. And the RTÉ Contempo Quartet gave the first performance of Frank Corcoran’s Fourth Quartet (For My 75th Birthday), in which the composer seemed to have the past very much on his mind, in the form of Bartók.