A first look at 'Supersonic', a documentary on the rise of the Gallagher brothers Liam and Noel with their band Oasis in the early 90s through to their acrimonious split in 2009. Video: Entertainment One 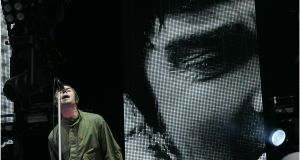 Oasis performing at Slane Castle, Co Meath in 2009. The documentary Supersonic, which charts the rise of the band, is due for release in October. Photograph: Dara Mac Dónaill

The first trailer for Supersonic has been unveiled, a film which documents the career of “one of rock’s true giants”, Oasis.

The film, which is due for release on October 2nd, was produced by director Asif Kapadia and James Gay-Rees who made Amy and was directed by Spike Island’s Mat Whitecross.

During the clip, the footage follows the ascent of brothers Noel Gallagher and Liam Gallagher from “lads on a council estate” to the heights of fame via tabloid exposure, 1990s hedonism and peaking with their two-day stint at Knebworth Park in 1996.

Although the voiceovers by both Liam and Noel were recorded separately, the film has given hope to fans who feel it is the brother’s first attempt at uniting since their acrimonious split in 2009.

Whitecross, the film’s director, did not rule out a possible reunion during an exclusive screening of the film at Festival No 6 in Wales on Sunday. Revealing that Coldplay’s Chris Martin had been playing the role of Oasis peacemaker, he added: “Neither of them have discounted the idea of getting back together. It will happen, I’m sure. The idea of never seeing them again for me is impossible.”

It is not yet known whether both brothers will attend the Supersonic premiere, but it’s likely it will take more than encouragement from Martin and a red carpet to unite the two together. As Liam Gallagher recently tweeted: “Just seen the trailer for oasis film i must say I do come across mighty fine super real unlike some people see you at the premiere LG x”.