Plus, songs you have to hear from DJ Koze and Arvo Party 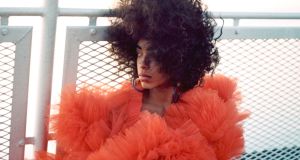 Kelsey Lu: “Shades of Blue was a glimpse of hopefulness and peace from within that depression.”

What: Cellist and vocalist

Why: The Los Angeles-based classically-trained cellist and vocalist Kelsey Lu has a unique aura to her music that draws from both classical influences (Prokofiev, Rachmaninoff), blues and R&B (Etta James, Billie Holiday), jazz (Thelonious Monk) and pop (Paul Simon, Led Zeppelin) and a past that saw her move away from a devout Jehovah’s Witness family through studying music at college.

Her orchestrally-arranged ambient folk music first appeared in 2016 on the independent label True Panther in the form of the Dreams EP. The six-track collection of music recorded in one take at the Holy Family Roman Catholic Church in Greenpoint, Brooklyn, with Kelsey singing, playing cello and utilising a loop pedal, has a transportive quality, like a daydream. It shifts and tilts, between created states of comfort and drama, drawing on repetition.

Lu’s music leans into the avant-garde spectrum yet she has collaborated with artists in the field of pop and R&B like Dev Hynes’s Blood Orange, Kelela and Wet.

After a two-year recorded silence (she played Body&Soul Festival in the interim last year), Lu has released Shades of Blue, a song that features gentle band instrumentation in her work for the first time. Lu says the song came about when she was squatting in a leather factory in New Jersey (as you do) feeling depressed after a period of tumultuousness in her life. “For me, Shades of Blue was a glimpse of hopefulness and peace from within that depression,” she said of the song, echoing the sentiments palpably felt by others in her music.

Last year, Midland’s Final Credits employed a pitched-up Gladys Knight sample into a club smash. In response, accidentally or otherwise, the German producer DJ Koze has used the same line from the song Neither One Of Us on his new track that more deftly weaves the line “It’s sad to think / I guess neither one of us / wants to be the first to say goodbye” into a song that puts that melancholic sentiment into an uplifting disco-specked number that glistens with rawness.

Formerly a member of Northern Irish rock band Lafaro, Herb Magee released one of the best albums of Irish electronica last year with his Arvo Party project and the album Null Set, which was nominated for a Northern Ireland Music Prize. Liberte?, a new song takes the experimental electronic tones into new maximalist heights drawing on synthesiser trance euphoria for a wild six-minute Jon Hopkins-esque rush.