Imagining Home: Out of the Tradition review 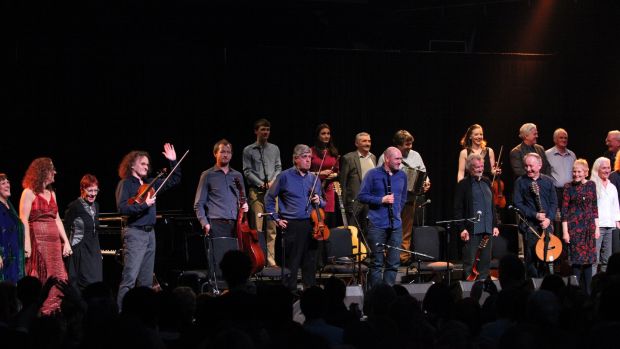 Elemental and meandering, our music, songs and poetry have carved themselves into the fabric of who we are, and this celebration of the last 100 years goes some way towards acknowledging that rich and complex journey. Anchored by a sublime melding of lighting and atmospheric film images, this is a night that celebrates the bedrock of the tradition in the shape of the solo voice (fiddle, pipes and harp), and then traces a picaresque path through some of the seminal moments that have added further tributaries to that river of sound.

Caoimhín Ó Raghallaigh chooses the music of Sliabh Luachra, stripped bare of its more boisterous and wayward qualities, as a fitting introduction to a night that is equal parts revelation and reverie. Liam O’Flynn’s pipes follow, and his ability to marry stately restraint with a freewheeling trajectory gives voice to the contradictions of disciplined self-expression and feckless imagination that have fuelled much of our journey over the past 100 years.

We live in an age when aerial views reign supreme, but tonight’s performances underscore the value of the subterranean, and of the unseen. Martin Hayes speaks of the strands that make up our musical identity and Louis de Paor makes sure we catch sight and sound of the more contrarian ones, those that go against thet grain, like Seán Ó Riordáin’s glorious poetry, and the wordsmithing that gave us the word “Poblacht”, just in time for its debut as the opening salvo in our Proclamation.

Out Of The Tradition cast its sights to the local and the global, from the boldly European perspective of O’Carolan to the belly deep emotion of Dónal Óg, by sean nós singer Treasa Ní Mhiolláin, and the jagged-edged, charismatic genius of Seán Ó Riada. Brian Conway and Brendan Dolan reignite the high octane sound that Sligo fiddler Michael Coleman mined out of early 20th century Manhattan, and the newly-minted Usher’s Island (anchored by Dónal Lunny, Andy Irvine and Paddy Glackin) shifts the intensely familiar (The Pigeon On The Gate) into spirit-shockingly new terrain, just as they did all those years ago in The Bothy Band, Sweeney’s Men and Planxty.

In between, Olwen Fouéré, Aoife Ní Bhriain, Iarla Ó Lionáird and others add to what is a glorious finale to a week of imagining and re-imagining.