Kevin Rowland opens up about his Irish roots, 1916, the Birmingham pub bombings of 1974 and an encounter with Muhammad Ali 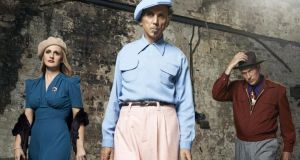 The artists formerly known as Dexys Midnight Runners are back in the top 10 after a 34-year absence. Now trading under the snappier moniker of Dexys, their fifth studio album sees Kevin Rowland return to his Irish roots with Let the Record Show: Dexys Do Irish and Country Soul, which has become their first top 10 album in the UK since Too-Rye-Ay back in the mists of 1982.

Their subsequent first album, Searching for the Young Soul Rebels, featured an image of a 13-year old boy fleeing from his home in Belfast on the cover. “I wanted a picture of unrest,” Rowland explained at the time. “It could have been from anywhere but I was secretly glad that it was from Ireland.”

Ferrero Rocher jokes
Fast-forward to 2016 and Dexys are launching their latest album with two very special live shows in Rough Trade East off Brick Lane in London and another in the more salubrious surroundings of the Irish Embassy on Grosvenor Place. The Irish Ambassador to Britain, Daniel Mulhall, specifically invited Rowland and Dexys to play in the embassy. “I’ve been making Ferrero Rocher jokes all week, mate,” Rowland quips to me after the show.

Dexys open both performances with Women of Ireland, which segues into a monumental version of To Love Somebody by the Bee Gees, a song that Nina Simone also made her own. It is a great example of how Dexys rip it up and start again.

“When we were doing To Love Somebody we took a different slant on the lyric,” Rowland says. “I’m being more accusatory and a bit bitter. I told the band it wasn’t coming across well, so when they were playing the chorus, they had to close their eyes and think of somebody who had rejected and hurt them, and imagine they’re playing it directly to them. I wanted to convey what the songs mean to me rather than just cover them. I work on ways to get inside the song and inhabit it. It’s a process that takes time. I have to believe it when I’m singing it, and so do the band.”

Dexys were always a Birmingham-based pop group with an Irish soul sensibility. On November 21st, 1974, bombs in two Birmingham pubs killed 21 people and injured 182 in one of the deadliest atrocities of the Troubles. The bombings stirred anti-Irish sentiment and led to the wrongful conviction of the Birmingham Six.

“I actually was in one of those pubs the night before,” Rowland says. “I was 20 and I’d just moved back to Birmingham. It was horrendous. I remember my mum phoning me the next morning saying, ‘Why didn’t you ring me to let me know you’re all right?’ It was horrible. I don’t really know what to say apart from that, and I know the inquest has reopened.”

At the Irish Embassy, Rowland dedicates a rendition of Phil Coulter’s The Town I Loved So Well to everyone who died in the Troubles. Earlier this year he participated in events in Dublin and London to commemorate the 1916 Rising. “From being in Ireland for those few days during the commemorations, reading the papers and watching TV, I just thought how sad and painful it all was,” he says. “At the same time, it was an incredibly brave thing what those guys did. Irish people were being treated pretty badly, so my overall feeling is it was needed.”

All the way to Wembley
Rowland is a fascinating example of an artist who explores and interrogates the tangled history and culture of these islands. When England won the World Cup in 1966, Rowland managed to get into Wembley.

“I was 12 and living in Harrow, which is just two stops from Wembley Park tube station,” he says.

“The first England game was against Uruguay. I went to my mum, ‘Can I go?’ She said, ‘You don’t have a ticket, Kevin.’ I went anyway. A copper asked me if I had a ticket. In an attack of honesty, I said I didn’t. He gave me one. England progressed and we went on holiday for a week down the south coast. We were driving back on the day of the final. My sister tells me I was telling my dad to hurry up and to drop me off at Wembley. They tell me now I was very obsessive and persistent. My mum thought I’d get arrested, but my dad thought they’d only throw me out. They dropped me at the bottom of Wembley Way. There were a few kids and local ruffians hanging around, and there was a criss-cross gate where we’d try to get in.

“Then, a Rolls Royce pulled up. Someone shouted ‘It’s Cassius Clay’, because he wasn’t called Muhammad Ali yet. He went up to a locked gate and knocked. He didn’t try very hard and he just got back in the Roller. He was over fighting Henry Cooper, so I went up to him and said, ‘Cassius, how many rounds is Cooper going to last?’ because he’d always predict the number of rounds in his fights. He didn’t say anything, but he waved to us, so we were delighted. A man came up and helped us pull the gate. We were all skinny, so we got in one at at a time. It was that kind of day. Normally my dad would be quite strict, but he encouraged me to bunk in, and grown men helped us. It was nearly extra time by the time I got in, but I didn’t care. It was an amazing day and an incredible atmosphere. Euphoria swept the whole country.”

Rowland and Dexys finish both their London showcases with a deeply moving performance of Knowledge of Beauty, later titled My National Pride, from their underrated third album Don’t Stand Me Down. “I’ve denied my beautiful heritage,” Rowland sings. “Gone away from my roots and come back home again. I gave away my individuality. And listened to the ‘now’ generation, when really I’m not one of those, but love has brought me closer to the truth, and right now, I couldn’t be any closer. To love your father is a fulfilling thing. My national pride is a personal pride.”

And with that, Dexys take a bow.

WHAT WOULD FERGIE DO? KEVIN ROWLAND ON . . .

Lisa O’Neill: “I met Lisa when we did Imagining Ireland in London and Dublin, and she sang England Has My Man to me. She is a real artist, straight from the heart. From that moment on, we became good friends. It is unusual that a day goes by where we don’t text or email. She is the best talent I’ve seen in a long time. She inspires me.”

DJ Dandelion: “I love Dandy. She brought me over to Dublin to DJ about 10 years ago, and she is bringing me back again in the summer. She is the coolest chick in Dublin – no contest.”

The Euros: “I follow Ireland in my heart, but I’m not anti-English, although I did go through a phase of that in the 1990 World Cup. If it was England v Ireland, I would be for Ireland. I am very pleased about the contribution the second-generation Irish have made here to British culture. I want to see Northern Ireland do well too. I want Wales to do well, but if it was Wales v England, it’ll definitely be England.”

Alex Ferguson: “I was born in Wolverhampton, so I followed Wolves. When I moved to London at 11, I still supported them, but I lost interest and during the Ferguson years United won me over. In the mid-1990s I loved the whole vibe around them and especially him. I never changed sides, because here you stick with your team, but I found myself checking their results first. I found Ferguson to be a great source of inspiration. In the past few years we used his ethos with the band. Me and Jim [Paterson] would often go, ‘What would Fergie do in this situation?’ ”