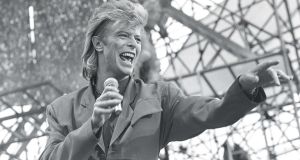 David Bowie has died at the age of 69. . He is pictured performing at Slane in July 1987. Photograph: Dermot O’Shea. 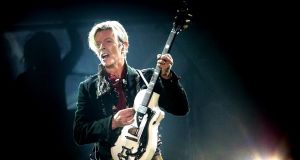 David Bowie has died at the age of 69. Photograph: Nils Meilvang/AP 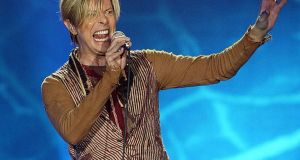 David Bowie has died at the age of 69. Photograph: Martin Rickett/PA Wire 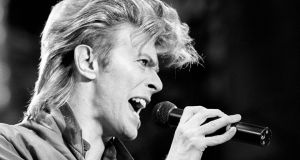 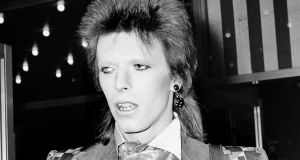 Singer-songwriter David Bowie has died at the age of 69 following an 18 month battle with cancer.

A statement on his Facebook page reads: “David Bowie died peacefully today surrounded by his family after a courageous 18 month battle with cancer. While many of you will share in this loss, we ask that you respect the family’s privacy during their time of grief.”

Bowie’s publicist confirmed his death on Monday morning, while the late musician’s son, director Duncan Jones, tweeted: “Very sorry and sad to say it’s true. I’ll be offline for a while. Love to all.”

Bowie released his 25th studio album Blackstar on Friday, January 8th, on the date of his 69th birthday.

The Starman singer made a surprise comeback in 2013 when he suddenly released a new single on his 66th birthday with an album out just weeks later, his first for 10 years.

The star made a habit of confounding the critics — killing off his most famous creation, Ziggy Stardust, at the height of his fame — and reinventing himself in roles including glam rocker, soul singer and hippie songwriter.

Bowie, born David Jones in post-war Brixton, south London, kicked off his music career in the R&B boom of the early 60s.

In 1969 he made his first appearance in the charts with Space Oddity.

A string of albums followed, before 1972’s The Rise And Fall Of Ziggy Stardust And The Spiders From Mars made him an international star.

The 1980s saw him combine his pop career with appearances in films including Merry Christmas, Mr Lawrence and Absolute Beginners.

Very sorry and sad to say it's true. I'll be offline for a while. Love to all. pic.twitter.com/Kh2fq3tf9m

I grew up listening to and watching the pop genius David Bowie. He was a master of re-invention, who kept getting it right. A huge loss.

In an interview published in The Irish Times on Thursday, Dublin guitarist Gerry Leonard, who played with Bowie between 2002 and 2013, spoke about the late singer’s collaboration style.

“I think he likes you to be who you are,” he said. “He likes things to be a little raw. What is thrilling about seeing people play is when the music isn’t scripted or planned.

“When the musicians around you are doing the same thing, then what you’re doing becomes amplified, you get that crackle, you get the unexpected. I think that’s what he looks for in people.”

Tributes have poured in for Bowie, with Ricky Gervais tweeting: “I just lost a hero. RIP David Bowie.”

British prime minister David Cameron also reacted on twitter: “I grew up listening to and watching the pop genius David Bowie. He was a master of re-invention, who kept getting it right. A huge loss.”

“We all knew something was amiss but this is more than just turning on your phone in the morning or turning on the television and finding out that another celebrity has passed on.

Others summoned Bowie’s lyrics in written tributes to mark his passing. Gladiator actor Russell Crowe, referencing one of Bowie’s better known singles which featured on covers album Pin Ups 1973, wrote: “RIP David. I loved your music. I loved you. One of the greatest performance artists to have ever lived. #sorrow.”

Tony Visconti, the record producer associated with many of Bowie’s albums, including 2016’s Blackstar, took to Facebook to pay tribute.

He said that his latest album was a parting gift.

“His death was no different from his life - a work of Art. He made Blackstar for us, his parting gift. I knew for a year this was the way it would be. I wasn’t, however, prepared for it.

“He was an extraordinary man, full of love and life. He will always be with us. For now, it is appropriate to cry.”

Bowie is survived by his wife, model Iman, the couple’s daughter Alexandria Zahra Jones and his son Duncan Jones from his first marriage to Angela Bowie (neé Barnett).