Azealia Banks: Who is she and why does she hate Ireland?

Who the hell is this Azealia Banks – and what exactly is her gripe with Ireland? 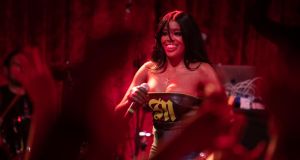 Oops, she’s done it again. Having taken a breather from taunting the entire population of Ireland at the start of the week, to make time to play her show in Dublin on Tuesday, the New York rapper Azealia Banks is back at the day job of spraying vitriol across the internet.

“Don’t you have a famine to go die in?” she most recently wrote to one follower. “You lot are a bunch of prideful inbred leprechauns... The rest of the world’s white folk don’t want to associate with you lot at all and it’s because you are barbarians.” And, she added later, “I’m happiest knowing the Irish are quarantined on an isle so they can continue to inbreed and keep their defective genes away from humanity.”

But who is Banks, and how, in a week that has seen rising Brexit tensions and a sweep of Oscar nominations for the Irish-produced movie The Favourite, has she come to so thoroughly dominate the headlines?

She can sing, she can rap and, as anyone who attended this week’s sensational Academy date will attest, she radiates the searing charisma that is the hallmark of a true pop star

Despite what her intensely loyal fans might say, Banks is nobody’s idea of a household name. The first many in Ireland will have heard of her was when the story of her Aer Lingus altercation ripped across social media on Monday – she called cabin crew on her flight from London to Dublin “f**king ugly Irish women”, and then left the plane before it took off.

Had her career gone a little differently, Banks could have been the next Beyoncé. She can sing, she can rap and, as anyone who attended this week’s sensational Academy date will attest, she radiates the searing charisma that is the hallmark of a true pop star.

She began to be talked about in late 2011, on the strength of her single 212. The track was a high-kicking, solar-plexus-punching rap track with not-safe-for-work lyrics. Frantic, uncompromising and thrillingly catchy, it seemed to herald the arrival of a new force in pop.

Banks’s ascent felt all but preordained. She was signed to XL Recordings, the label behind the rise of Adele, FKA Twigs and MIA. It was a perfect meeting of minds. XL valued artistic independence but also knew how to flog music to the masses.

She had the media in her pocket, too. Hot Press quickly interviewed her, NME slapped her on its cover before she had put out an album – a big deal even as late as 2012 – and she featured prominently on the BBC’s Sound Of… list, the broadcaster’s annual barometer of up-and-coming talent.

Alas, then the wheels came off, as she fell out with XL’s boss, Richard Russell. Banks didn’t hold back about their differences. “Richard was cool, but as soon as I didn’t want to use his beats it got real sour,” she said. “He wound up calling me ‘amateur’ and shit, and the XL interns started talking shit about me. It just got real f**king funny. I was, like, ‘I didn’t come here for a date. I came here to cut some f**king records.’”

She has never really regained her momentum. Her debut (and so far only) album, Broke with Expensive Taste, didn’t see daylight until November 2014, a lifetime after that initial hype. By then music had changed and artists such as Taylor Swift were mastering the art of forging intimate relationships with their fans via social media.

Banks could never attune herself to this cuddly paradigm and continued to use the internet to kick dirt in the faces of her perceived detractors. She would go on to feud with – deep breath – Lady Gaga, Iggy Azalea, Rihanna, Pharrell Williams, Rita Ora and Kendrick Lamar, among others.

Even Amanda Brunker came in for a pummelling. “Wow, how ignorant,” Banks exclaimed in 2012, after the Dublin socialite tweeted lyrics to 212 and added that she “wasn’t black enough” to “tease” the rest of the song.

Could Banks have been winding us up solely to draw attention to her short Ireland and UK tour? And, if so, can all publicity really be good publicity?

In 2015 the rapper risked alienating her many gay fans by getting into a fight with a fellow passenger as they got off a Delta Air Lines flight, in the course of which she called a Delta employee a “f**king f**k”.

Banks would subsequently file a police report accusing the actor Russell Crowe of calling her a n****r and is involved in an ongoing spat with the tech entrepreneur Elon Musk and his musician girlfriend, Grimes, the details of which would fill more pages than the final three Harry Potter books.

So perhaps Ireland’s women – including the Rose of Tralee, Kirsten Mate Maher, with whom Banks also clashed online this week – can consider themselves in esteemed company.

How much of all this has been calculated provocation? It was telling that, on stage at the Academy, Banks was a picture of restraint and professional cool. Even though she left the sell-out audience waiting until 9.35pm before she arrived on stage, and then performed for a little over an hour, every second under the spotlight was a masterclass in concision from Banks – who, in addition to her skills as a rhymer, is blessed with roof-raising vocals.

She graciously threw free T-shirts into the crowd, at one point called a halt to ensure all was well with uberfans up front, and said sorry – sort of – for the “ugly” slur, dedicating her track Liquorice “to all the beautiful Irish women”.

It was difficult to reconcile this smiling, at-ease Banks with the Instagram insult-flinger. Could she have been winding us up solely to draw attention to her short Ireland and UK tour? And, if so, can all publicity really be good publicity? Many people are understandably irked at Banks. In the end the real loser may be the rapper herself.

Her gig this Sunday at the 1,500-capacity Electric Brixton, in London, has yet to sell out. Tickets are also still available for the Ritz Academy, in Manchester, which holds 1,500. Whether Banks is creating a fuss only to raise her profile is impossible for outsiders to say, but this is a tour that could clearly do with a boost.