Scottish folkster Alasdair Roberts may be inspired by the Scottish landscape and Irish sean-nós singing, but he makes songs about now 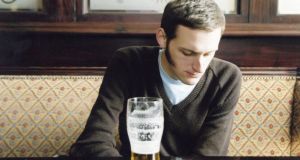 Alasdair Roberts’s music embodies the wildness, the humour and the beauty of the Scottish countryside where he grew up. Born to a Scottish father and German mother, the young Roberts moved to Glasgow to enrol at university and has lived there ever since, but the free, rolling nature of the highlands is still very present in almost everything he does.

“I grew up in the country and still sometimes pine for that, long for that in a way,” he says. “It’s a beautiful part of the country to grow up in and I think it left its mark on me. There’s definitely elements of this exploration of the natural world that come into my writing. But I think that’s quite typical of a lot of Scottish writers. There’s this position of exploring the natural world or using it as a source of conceit or metaphor or allegory. Maybe it’s a kind of particularly Celtic thing?”

Most songwriters would probably cringe at the thought of their work being described as Celtic, but it’s a tag that Roberts explores with the open eyes and ears of a scholar, digging for stories and tunes that bridge the gap between today’s secular present and the traditions of the past. Thankfully for us, the new age route of druids and faeries is skilfully avoided, with Roberts taking a far more down-to-earth, humanist approach over the course of five increasingly refined albums. Roberts is a master storyteller and there are real people in his lyrics, not cartoon constructions. In his songs, their lives, their emotions, become as real and important as our own.

“I suppose there’s a danger if you go down the nature or mysticism kind of thing, of going into new-age hippie escapism or something,” he says. “It’s funny when you think of certain peoples’ ideas of what it means to be Celtic – it’s all to do with druids and bards and mist- covered mountains. And then think about what the reality of life would have been like for people in the Celtic areas 200 years ago, it would have been nothing like that. It would have been a very hard kind of life. They wouldn’t have had time to sit around dreaming and playing their harps or picking sacred herbs in the grove. It can become a little bit like dungeons and dragons!”

Roberts isn’t strictly a traditional singer, though he has released albums composed entirely of traditional songs. On his last album of self-penned work, A Wonder Working Stone, we find modern songs with modern characters and modern concerns that find inspiration in the characters and concerns of the past, blending personalised fact and fiction, past and present, in an incantatory way. His songs are modernis in the literary sense; they are a history of everyone through the voice of an individual.

A new project with Scottish poet Robin Robertson sees Roberts setting the poet’s suite of poems about the archipelago of St Kilda to music. The poetry element feels natural in the context of Roberts’s work, but he is unlikely to go down that route himself. Although he studied literature in university, Roberts says that his interest in the written word is channelled entirely into his songs.

“Everything I write normally ends up becoming a song,” he says. “At some level, I enjoy the marriage of words and melody, I enjoy singing, so I like to turn things into songs. Maybe I also believe that they wouldn’t be strong enough to stand on their own as poems. I think you can get away with a lot more in a song.”

Singing, I point out, is also more communal, something which must appeal to Roberts, who has a stated preference for collaboration over solo performance.

“It’s kind of a ritual thing,” he says. “It has a function. I was at a funeral on Saturday and I was struck by the importance of the singing of hymns in a Christian funeral service. They’re an important part of the whole fabric of the service of a funeral. It just wouldn’t feel right without it.”

Given our folk history, Ireland seems a natural place for Roberts to find an audience, and the reaction to his shows here has always been overwhelmingly positive. Roberts himself has found inspiration in this country’s music, even using melodies from Andy Irvine and Wen Graham on A Wonder Working Stone. However, the most profound influence is a little less explicit.

“At a certain point, I got really interested in sean nós singing,” he says. “I listened to a lot of recordings of various sean nós singers, kind of absorbing that style even though I’m not a Gaelic speaker – I’m not even a Scottish Gaelic speaker. I just find a real beauty in that singing style so it has influenced my singing in a way.”

While there are obvious links between the traditional music of Scotland and Ireland, links which go back centuries, the two are different beasts. This difference is sometimes lost on audiences less familiar with the idiom, though Roberts maintains that, like his own feeling for sean nós, it’s the emotional reaction to the music, not a total understanding of it, which is most important.

“Sometimes when I’ve played in North America, people have assumed that my fellow musicians and me are Irish because they don’t know anything about Scottish music,” he says. “I sing a lot of these ballads and a lot of my own songs are kind of reliant on an understanding of the language I’m singing in, so maybe it’s lost on non-English or non-Scots speakers, sometimes. But then you try to make the music as beautiful and interesting as possible in the hope that people will still enjoy it even if they don’t speak the language.”

From New Zealand to Saudi Arabia: When women won the vote worldwide

Womansplaining: books that every man should read