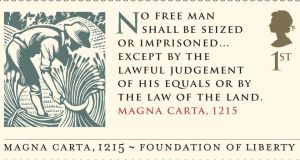 A Royal Mail commemorative stamp from a set marking the 800th anniversary this month of the signing of the Magna Carta in England. Photograph: Royal Mail/PA Wire

An exhibition containing a 14th century copy of the Magna Carta was opened in Dublin’s Christ Church Cathedral on Thursday evening by the British ambassador to Ireland, Dominick Chilcott.

One of the most important legal documents in history, the Magna Carta established the principle that everyone, including a monarch, is subject to the law and guaranteed all subjects the right to a free trial.

Its foundation principles are contained in the 1791 American Bill of Rights and the Universal Declaration of Human Rights, drawn up after the second World War.

The Christ Church copy will be displayed for the very first time in this exhibition.

Dating from the 14th century, it is contained in the cathedral’s Liber Niger or Black Book, a collection of documents created by the Canons of Christ Church, and will be centrepiece of the interactive exhibition in the crypt.

The first country outside England to receive the Magna Carta was Ireland. In February 1217 it was sent to Dublin and became fundamental to the English common law tradition in Ireland, which survives to this day.

The original Magna Carta has close links with Christ Church and Dublin.

He was present at Runnymede in England during the negotiations between King John and the barons which preceded the signing of the Magna Carta, and his name appears on it as the second named witness, after Stephen Langton, Archbishop of Canterbury.

‘We had the fear when we were asked to dance. Now the fear is leaving dance behind’

Soccer Mommy: no longer on the sidelines
10