Lough Derg: the Ironman of pilgrimages 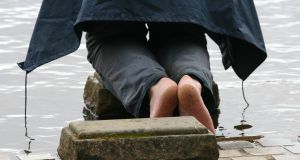 I am standing with my back to the basilica wall, arms outstretched, as though crucified, declaring to anyone who’ll listen, “I renounce the world, the flesh and the devil,” repeating it two more times, just to make sure.

I’ve completed just 45 minutes of a 40-hour pilgrimage on Lough Derg island in Co Donegal, which reputably is an entranceway to the pits of hell, where St Patrick witnessed the tortures of eternal damnation in the 5th century and Knight Owein in 1148 was dragged through into the underworld by demons with iron hooks. This is the Ironman of pilgrimages, reputed to be the most challenging in all of Christendom, and the fact that the cave entrance to hell lies right below this basilica makes everything all the more intense.

I came out of curiosity, but no sooner had I boarded the pilgrim boat to cross the exposed waters of Lough Derg over to the liminal realm of Station Island, than I was transfixed by the intensity of the whole experience and the commitment of my fellow pilgrims who have all been fasting for 15 hours before we arrived.

While surrendering our shoes and wrapping ourselves in raingear, I begin to hear anxious murmurings about how few of us there are this year. Previously there might have been a thousand pilgrims, but today there are fewer than 100. The regulars look concerned and they whisper about the massive debts that the site has amassed after an extensive building project which created comfortable dormitories and shower rooms – the last thing that diehard pilgrims, keen to have their soul scoured by adversity and privation, really wanted.

I wrap myself in a scarf and two jumpers and head out to complete the first of nine “Stations”, each of which entails reciting 289 prayers while prostrating, kneeling and bending at various sacred spots. My renunciation of the world, the flesh and the devil came after I’d first honoured the Blessed Sacrament in the basilica, then prayed an Our Father, a Hail Mary and a Creed while kneeling at and kissing a pillar, twisted like a DNA strand, called St Patrick’s Cross. Then after my renouncement and crucifixion stance, I walked four times around the basilica saying seven rosaries and another creed.

All of this is just an appetiser for the real meat of the Station which involves walking around six stony circular tracks which surround rocks with metal crosses bolted into them. Each is known as a penitential bed and is dedicated to a particular saint. I walk clockwise around the outside of each bed three times while praying three Hail Marys and three Our Fathers, followed by a Creed. I then kneel on the jagged stones at the entrance to each bed and repeat these prayers. I repeat the same thing on the inside of each bed, before crouching back down on my knees again to rattle through the prayers one more time for good measure.

It wasn’t long before I was leaving a bloody trail on the rocks behind me as the sharp stones penetrated my skin, my knees were badly bruised and stabs of pain were shooting up my back. But with it came a strange sense of elation at the humility of our debasement and an enormous compassion for the sighs, grunts and weary exclamations of those around me. My world had contracted to the swishing and rubbing of Gortex, flashes of glinting rosary beads, glimpses of shins and callouses against a background of constant prayers whispered from murmuring mouths.

These circumambulations are the most profound, or at least choreographic, element of the Stations, because of all the clambering and grappling you are doing with other pilgrims, all pulling at and wrestling with each other, like a game of Twister, to find a spot to kneel on the jagged rocks that isn’t too tortuous, and to help each other get up off the ground again.

After the endurance of the six penitential beds, I sped through some more prayers at the lake shore while first standing looking out towards the beauty of Donegal and then kneeling on concrete, which feels like an extraordinary indulgence after the jagged rocks. I then blessed myself with lake water and each time I did this it brought a leap of true joy. Next, it’s back to the DNA pillar for some final prayers before heading into the basilica to pray Psalm 16 for the pope, which includes the lines, “Those who choose other gods increase their sorrows, Never will I offer their offering of blood. Never will I take their name upon my lips.”

One Station completed, nine more to go. All of which must be done over 40 hours with no sleep, virtually no food and little protection from the rain or cold. Maybe, it is no wonder that pilgrim numbers are down. Ritualistic debasement is no longer popular in an era of instant gratification, but it would be such a loss to end this centuries old tradition that dates back to before the Middle Ages, and that so many of our grandparents and great-grandparents all experienced.

When we were gathered at the basilica after completing two more Stations and a benediction, and before a 24-hour vigil, the prior of Lough Derg ( Fr Owen McEneaney at the time) addressed the paucity of pilgrims. “I won’t deny it,” he said, “numbers have been very low this year. It’s important to name it as it is. Unless we all help to support this, our future may be in doubt.”

His forebodings were the talk in the refractory afterwards, when I finally broke my fast for a cup of tea and some dry oatcakes – they were delicious and would command top price in a gourmet cheese shop. People recalled their previous visits here, when the place was teeming with students seeking help with their love lives or their future careers, or showing gratitude for successful exams. Back then it was a prime spot for flirting and hooking up. Couples would come to give thanks for the birth of a child or the cure of a malady. Community groups, societies and work teams would come. It was a social occasion each summer.

“The young just aren’t interested anymore,” said quite a few people, ignoring entirely the fact that there were whole tables full of young Traveller men and women just nearby.

For the fact is that while everyone else is abandoning Lough Derg, the Travelling community retains its staunch loyalty to it. Their devotion and commitment is humbling, especially as many suffer ailments and weight issues due to inadequate access to healthcare, and you see them helping each other to get through each ordeal. At one point while at my weariest circling the stone beds, a sallow skinned Amy Winehouse look-a-like Traveller with jet black hair, put her mouth to my ear and whispered something that was either reassuring or enticing, either way it propelled me forward with added vigour.

We shuffled around the basilica all night praying our woes away, prodding those who were falling asleep, until finally the great doors of the basilica were ceremoniously opened just before dawn and we stood transfixed as the sun rose over the lake. The elation that came with this symbolic journey from darkness into light was something I’d normally associate only with recreational drugs.

By mid-morning we were all encouraged to go to confession and when I told the priest that I hadn’t confessed for 30 years, he said he’d go easy on me. His first question was did I kill anyone and I was able to assure him that I hadn’t. “But, did you cause anyone to die inside by caustic or unkind words?” This was him going easy?

“Did you behave amorally with a married woman?” I shook my head. “Did you fornicate – with others, or commit fornication of the self?” I wouldn’t like to experience his hard confession.

During the course of the day, Fr Eoin was taking people aside to reiterate the importance of increasing the numbers of pilgrims. He wanted us all to buy his raffle tickets and make donations. He encouraged us to post positively on Facebook and to make sure that next year we brought more people, at least two or three carloads from our parish or places of work. The urgency was at odds with the calm of the island, and yet it felt necessary.

In the three years since I visited Lough Derg the bank debts have been paid off, but visitor numbers have not increased. But the new prior, Fr La Flynn, is optimistic that a new style of pilgrimage – which is less about sin and preparing for purgatory – can have a valuable place in society. Despite the cold, hunger, midges, tedium and intellectual paucity of the experience, I did emerge rejuvenated and grateful , and profoundly impacted by the fact that Lough Derg represents our heritage far closer than anything a detox yoga holiday or faux Buddhist retreat can provide. At €70 for three days of switching off and tuning in to what matters, I felt it was worth a bit of discomfort.