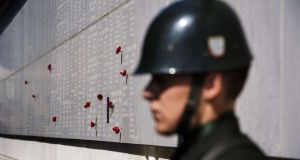 A Turkish soldier stands guard at the Helles Memorial during a commemoration ceremony marking the 100th anniversary of the start of the Battle of Gallipoli. Photograph: Dimitar Dilkoff/AFP/Getty Images

Hugh MacDermot from Coolavin near Ballaghaderreen was 18 when he was killed at Gallipoli on August 9th 1915.

His company commander Capt Wigley, in a note to the young man’s parents, recalled: “We were ordered to take part in repelling a strong Turkish attack. Our own artillery was apparently engaged in supporting the main attack and could give us no assistance. I came up with my company and we went straight into the firing line. Your gallant son was lying down next me in the line (there were no trenches).

“Presently he had to move up to make room for another man. Among the hundreds of bullets that were flying around, I felt one whiz past my neck and instinctively looked in his direction and saw he had been struck in the back of the neck. Death was relatively instantaneous. A few minutes later I was seriously wounded in the head so cannot say what happened afterwards.”

On October 14th 1915 a Pte P McKinney wrote to the MacDermot’s family on behalf of Platoon 12 of the 6th Royal Irish Fusiliers, of which he was a member and of which Second Lt Hugh MacDermot was officer in command for the 12 months before he was killed.

“The chaps were only eager to do something great for him as it would be impossible to find another gentleman like him as he was one in every sense of the word and we simply adored him . . .” he wrote.

Pte McKinney was in a detachment of the platoon following another led by Lt MacDermot at Gallipoli. On hearing Hugh MacDermot was killed:

“I was thunderstruck. I could have nearly cried, and I may say after him being killed there was no mercy in our platoon for the Turks under any circumstances and his life was well avenged I can assure you . . . It is impossible to express the unbounding love and respect me and my companions held for him, in fact it is inexpressible the grief his death has caused us . . .”

Hugh Maurice MacDermot, heir to the title The MacDermot, Prince of Coolavin, was one of 39 young men from the parish of Ballaghaderreen Co Roscommon, killed in the first World War. He is among the 20,763 with “no known grave” remembered at the Helles Memorial in Gallipoli, where his name is inscribed.

A plaque commemorating him was erected near their home at the Catholic Church in Monasteraden, Co Sligo, by his parents Charles and Caroline.

They could do so because the MacDermots were able to stand apart from the maelstrom of mythologies which overwhelmed Ireland in the decades after Hugh’s death.

The MacDermots are one of the oldest surviving Gaelic Catholic families with a lineage going back 32 generations to AD 157. “We didn’t run away,” Madam Felicity MacDermot said in 2006. She was referring to the Flight of the Earls after defeat at Kinsale in 1601.

The MacDermots survived famine, war, confiscations and the narrow myths of both major traditions on this island through a 20th century which wilfully forgot those other young Catholic Irishmen trapped in a cusp of history.

It was at the Island Road railway station near Coolavin that a local committee gathered to say farewell to young Lt Hugh MacDermot as he headed off to war earlier in 1915.

Their address to him was already pregnant with a reserve which would later suppress memory of their young dead from the first World War.

“We are moved at this critical moment in your life and in that of our country, to assemble here today to bid you au revoir, wish you luck and express in a feeble way how much your dauntless spirit and noble example has thrilled and moved even the oldest of us ‘to go and do likewise’.

“Circumstances prevent many of us, however, but the spirit that animates us today, fostered by the hands of an alien but friendly government, will no doubt be enlivened to a greater extent under our native parliament. Then, please God, when next a scion of the Princely House of MacDermot goes forth to battle, he shall be surrounded, as of old, by hundreds of daring followers . . .”

All were Home Rulers too, as was Lt MacDermot’s grandfather, also Hugh. Attorney General for Ireland in the 1890s, he was passed over for appointment to the judiciary because of his politics.

The Island Road signatories had been influenced by the formation of the Irish Volunteers in 1913, and were resistant to joining up.

The dominant political influence in Ballaghaderreen then was local MP John Dillon, former leader of the Irish Party at Westminster.

He, along with Irish Party leader John Redmond and the Catholic primate of All-Ireland Cardinal Michael Logue, encouraged young Catholic Irishmen to enlist and fight for the freedom of small nations, particularly Catholic Belgium, in that war. It was a major reason many did so.

In August 2005 a special Mass took place at Monasteraden Church, half parish of Ballaghaderreen, to remember Lt Hugh MacDermot on the 90th anniversary of his death. Remembered also then were the other 55 young men from the parish who died in the first World War.

The Mass was organised by the late Madam Felicity MacDermot, Lt Hugh’s sister-in-law, and local man Peter Sherlock. It was the first commemorative Mass in the parish for all its young men killed in the war.

A second such Mass took place at St Nathy’s Cathedral, Ballaghaderreen, on November11th last year, at 11am.