Winona Ryder and Keanu Reeves might be married, says Coppola 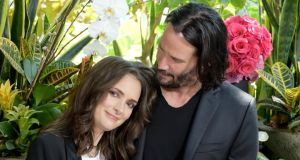 Francis Ford Coppola has backed a theory by Winona Ryder that she and Keanu Reeves might be married.

The director of the 1992 film Bram Stoker’s Dracula, which starred Ryder and Reeves, corroborated Ryder’s story that a wedding scene involving the pair could be legally binding.

After filming concluded, Coppola said, he was unhappy with a stylised version of the scene and decided that “having the real wedding ceremony as it might be in that religion [Greek Orthodox Christianity] would be beautiful”.

He then filmed a ceremony in a Greek Orthodox church in Los Angeles with a real priest. “This is pretty authentic, and I think very beautiful, because we actually did the ceremony and had the priest do the ceremony,” Coppola said. “So in a sense, when we were all done, we realised that Keanu and Winona really are married as a result of this scene and this ceremony.”

Footage of the ceremony is spliced in the film with the death of a friend, who has been turned into a vampire. Ryder and Reeves drink from a goblet and are blessed with a wreath of white roses before kissing energetically. Neither is seen speaking, and it is unknown whether the priest is using the pair’s real names or their characters’.

Ryder’s latest collaboration with Reeves is a romcom called Destination Wedding. It is their fourth film together, after Dracula, A Scanner Darkly and The Private Lives of Pippa Lee. – Guardian