To Catch a Thief review: Hitchcock at his breeziest

To Catch a Thief - trailer 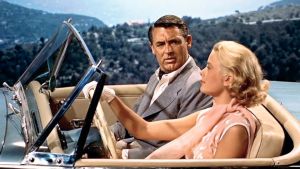 Film Title: TO CATCH A THIEF

Coming after the masterpiece that was Rear Window and a few years before the late purple patch that began with Vertigo, To Catch a Thief (1955) occupies an uncertain place in the Hitchcock canon. The film is among the breeziest of the master’s better-known works. The psychosexual perversions are not nearly so heightened as they would become in Marnie and The Birds. Hitchcock’s devotion to the exploitation of location tips into travelogue as he extracts every ounce of beauty from the Côte d’Azur locations.

For these reasons and others, critics have never thought it wholly respectable. Yet To Catch a Thief remains perfect bank-holiday afternoon entertainment. It slides down ever so smoothly without catching the throat. That can be seen as recommendation.

Based on a novel by David Dodge, the film involves Hitchcock’s favourite theme: a man countering false accusations of wrongdoing. The twist in To Catch a Thief (and the reason why the film is less draped in Kafkaesque menace than, say, The Wrong Man) is that the protagonist is not exactly an innocent person.

The impeccably ironic Cary Grant plays a retired jewel thief whose calm is disturbed when a copycat begins lifting necklaces in his trademark style. Investigating the thefts, he runs up against a grand American lady (the imposing Jessie Royce Landis) and her intelligent daughter (a more than usually glacial Grace Kelly). Something a little like romance begins. But is she on to him or is he onto her?

It’s all very superficial, but carried off with impeccable style. The widescreen process suits the scenic photography very nicely. The indomitable Edith Head drapes Kelly in costumes that blaze up the celluloid.

For all the film’s breathy joy, it is hard to view the drives along the Mediterranean coast without pondering Kelly’s later history. This was her last film with Hitchcock. A year later she was to become engaged to Rainier of Monaco and, in 1982, she crashed fatally on these very mountain roads. There are always subtexts with Hitch.