This documentary will make you rethink everything about US black history 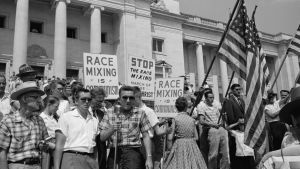 This anti-integration rally in Little Rock, Arkansas, is featured in I am not your Negro.

Film Title: I Am Not Your Negro

Earlier this year this stirring, vital, essential film made headlines when it became the latest victim of online “vote brigading”, as a swarm of racist IMDb and Metacritic users sought to counteract the acclaim critics had bestowed on the picture.

Long before the film was released, similarly minded bigots had gathered around the official trailer on YouTube to denounce it as “white guilt propaganda” and “demagoguery”.

But why would the troglodytes venture out of their caves for a historical documentary? The pitch rightly identifies I am Not Your Negro as ideal rainy half-day viewing before school’s out for summer.

In 1979, author James Baldwin wrote a letter to his literary agent describing his next project. Remember This House would be Baldwin’s personal account of the lives and assassinations of three of his close friends: civil rights activists Medgar Evers, Malcolm X and Martin Luther King Jr.

Baldwin died in 1987 leaving behind just 30 completed pages. Drawing on that manuscript, archival footage and Baldwin’s 1976 mediation on race and Hollywood The Devil Finds Work, director Raoul Peck – a human-rights activist and Haiti’s former minister for culture – has completed the project with an intellectual aplomb that would surely have pleased Baldwin.

Here is a picture that, rather like its dazzlingly brilliant subject, will make you rethink everything.

Many of Baldwin’s insights are pertinent and angry, though delivered in the plumiest, loveliest vowels: “I am not an object: I am one of the people who built this country,” he says, smoothly. He speaks of the lie of the “pretended humanism” of western culture sternly, incredulously, sadly, but without bile: “The west has no moral authority. The story of the Negro in America is the story of America; it is not a pretty story.”

Editor Alexandra Strauss emphasises the urgency of Baldwin’s complaints with pregnant juxtapositions. Every time an African-American behaves as if they have “a right to be here, you have attacked the entire power structure of the western world,” says Baldwin, as images of Tamir Rice, Darius Simmons, Trayvon Martin, Aiyana Stanley-Jones, Christopher McCray, Cameron Tillman, Amir Brooks appear on screen.

An opening sequence provides a handy riposte to those who would point to the most recent two-term US president. “But it’s getting so much better,” notes TV host Dick Cavett. “There are Negro mayors; there are Negros in sports, and in television commercials.”

Baldwin later recounts the peals of laughter he heard in a Harlem barbershop when Bobby Kennedy suggested that it was “ . . . conceivable, that in 40 years’ time, we might have a Negro president”. From the Harlem viewpoint, Bobby Kennedy just got here, explains Baldwin, we’re here 400 years.

This serves as an urgently needed slap-down for the history-blinkered who say “What about all lives?” when confronted with Black Lives Matter. Hence the troglodytes. See it.