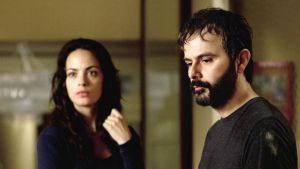 Film Title: The Past

Ahmad (Ali Mosaffa, excellent) returns to France from Iran, ostensibly to finalise his divorce from Marie (Bérénice Bejo), whom he has not seen in four years. Upon arriving, he finds that Marie wants him to stay in her suburban Parisian home so that he might talk to their two children.

The arrangement is far from comfortable: Marie’s new domestic partner, Samir (Tahar Rahim), has already moved in with his young son. Ahmad and Marie’s eldest daughter, a difficult teenager, doesn’t approve of Samir. Her reasons form a series of impactful plot twists and reveals.

The post-Miramax marketplace is seldom troubled by foreign-language titles. The notion of a crossover arthouse hit, even one with US indie origins, seems increasingly fanciful. Yet somehow Iranian film-maker Asghar Farhadi has established himself as a global player. Building on early festival hits The Beautiful City and Fireworks Wednesday, Farhadi came to international prominence with the Oscar-winning A Separation, which proved successful enough to secure a belated release for the director’s 2009 domestic thriller, About Elly.

The Past is recognisably a Farhadi joint: in common with A Separation and About Elly, it mines a domestic milieu to produce surprising plot twists, emotional pyrotechnics and Hitchcockian suspense. As ever, the writer-director’s terrain is properly postmodern and utterly familiar: The Past offers a landscape signposted by fractured loyalties, displacement and stepfamilies.

The tension between tradition and modernity that fuelled A Separation is blasted into smithereens here. Cultural, national and even familial identities have been eclipsed by smaller divisions. Secrets and loyalties define smaller groups and, often, lonely subsets of one. The Artist’s Bejo rises to the occasion with a performance characterised by thinly veiled anxiety and dread. Rahim is differently afflicted: every onscreen appearance is black-dogged and swathed in guilt.

There are minor inconsistencies and contrivances that hold the film backfrom achieving the elegant dramatic shapeliness of A Separation and About Elly. . At the level of the plot point, this feels a little less organic than Farhadi’s previous films. But the domestic particulars of this otherwise taut, dazzling drama do ring true. The Past has rarely seemed more like a foreign country that ought to come with a travel warning.