Carey Mulligan shines in an entertaining, imaginative exercise in score-settling 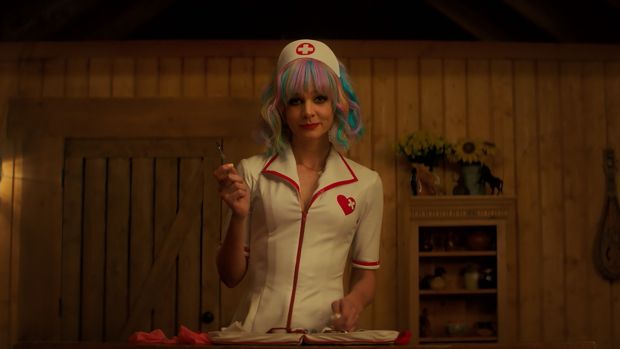 Emerald Fennell’s Fanta-coloured melodrama – or pitch-black comedy? – has profited from the long delay in its release. Promising Young Woman, originally scheduled for the awards-unfriendly spring of 2020, has steadily built up followers to become a serious contender for best picture at the (finally) imminent Academy Awards.

The months of closer attention have also brought some unhappiness its way. A number of negative reviews have wondered if the film, which deals with delayed retribution for a college rape, blanks its unseen victim, relies on too much implausible plotting and, in a Grand Guignol ending (about which we’ll say no more), betrays its protagonist and all her imagined supporters.

These are discussions worth having. At times the film does ask too much of the audience’s credulity. Despite a reliably strong performance from Alfred Molina, I couldn’t believe the lawyer tortured by his defence, years earlier, of an accused rapist, but that may say less about Fennell’s screenplay than it does about my view of the American legal profession.

For the most part, the picture succeeds thrillingly as a latter-day variation on the Jacobean revenge tragedy. Such plays allowed the wildest plots and the most absurd coincidences. The narrative convolutions and unjustified outrages are pleasures in themselves. Who wouldn’t want to see the villains being served their innocent children in a pie? (Don’t worry. That’s Shakespeare, not Fennell.)

The thing would make little sense without a committed actor at its heart. Playing somewhat against her previous types, Carey Mulligan delivers brilliantly with at least three intertwined performances.

We first meet Cassie Thomas apparently passed out in a nightclub. A bunch of guys leave off their sub-Neil LaBute blathering – a female colleague is complaining about mistreatment – to wonder about the splayed young woman. Eventually, expressing unconvincing concern, the one played by Adam Brody offers to take her home. He feeds her luridly coloured cocktails. She weakens further, but, just as he is about to pounce, she snaps upright and, in a voice more sober than the average DUP lay-preacher, asks him what he thinks he is doing.

That opening is already famous and it leads into further variations on a mischievous theme. Christopher Mintz-Plasse gets to play the class of oik who pretends to superficial feminism. “I never understand why women wear so much make-up,” he says, as such people will. Later, Cassie gets deeper into more complex plots aimed at avenging an old friend raped in medical school.

Mulligan is blithe and sassy as the child of disappointed parents (low-temperature Clancy Brown and Jennifer Coolidge). Pulling an outrageous scam on her former college dean (Connie Britton), she burns with forensic fury. During the faux-drunken night-time sequences, she switches from confused victim to articulate accuser in an electrifying nanosecond.

It would be stretching praise to suggest that these strands wind together to form a balanced, nuanced character study. Promising Young Woman is not playing those games. Cassie is more of a bold avatar than a fleshed-out personality. Similarly, the plotting prioritises sensation over logic.

None of this is meant as criticism. If anything, the film could lean a bit more towards the extremes of exploitation films such as Abel Ferrara’s Ms .45 or Wes Craven’s The Last House on the Left. Fennell’s brazenness fails her when it comes to delivering the final blow.

Promising Young Woman nonetheless remains an entertaining, imaginative exercise in creative score-settling. Benjamin Kracun’s cinematography pops with sickening candy colours. The hugely original sound design alternates puzzling dreamy rumbles with needle drops on everything from Wagner to Britney. We will allow Fennell a few indulgences typical of debut directors – the parents sit down to watch The Night of the Hunter (clang!) at one stage – in her development of an otherwise cracking mainstream entertainment.

You certainly won’t be bored.

On Sky Cinema and Now TV from April 16th

Angela Lansbury: still a star at 90