Barry Jenkins meticulous, emotional triptych on masculinity, identity and sexuality offers up a remarkable new American hero for our age 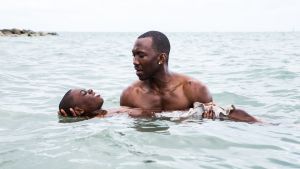 Barry Jenkins’s transcendent second feature is about the challenges boys encounter as they become men. As if that doesn’t sound sufficiently overworked, it is about the particular challenges that hard men encounter when they walk down mean streets.

Cinema has been in and around this area time and time again, but Moonlight still feels abundantly fresh and endlessly imaginative. No traces of the film’s origins in an unperformed play remain. (Contrast that with this week’s proudly stagey Fences). As meticulous in his shots, clean in his colours and precise in his rhythms as Wong Kar Wai, Jenkins gives us a complex American hero to compare with Huckleberry Finn or Holden Caulfield.

That character, who goes by three names, is played by three different actors in three discrete acts. In the first, “Little” (Alex Hibbert) encounters Juan (Mahershala Ali), a kindly drug dealer, when hiding from bullies. Juan and his equally concerned partner (Janelle Monáe) give the boy a meal and urge him towards the straight and narrow. There is a poisonous irony in the relationship. “My mama does drugs?” Chiron says to Juan. “And you sell drugs?” Juan is both Chiron’s saviour and the agent of his family’s decline.

In the second part, now called by his real name, Chiron (Ashton Sanders) is struggling with bullies at school. He has a sexual encounter with his best friend Kevin (Jharrel Jerome), but they are edged apart by the cruel dynamics of the schoolyard. Meanwhile, Paula (Naomie Harris), his mother, sinks deeper into addiction.

In the final part of the triptych, Chiron (Trevante Rhodes), now called “Black”, is living much the same life that Juan once led. The muscular, charismatic ex-con deals drugs, but he seems uncomfortable in the role of player. A phone call from Kevin causes him to reconnect with his past.

Moonlight is to be commended for approaching all “social issues” at an oblique angle with its windows open only a crack. Set in an African-American section of Miami, the film allows its characters few escape routes from the informal social boundaries. Kevin’s relatively humble career as a chef feels, in this context, like the result of a successful lunge for liberty. Obviously an intelligent fellow, Chiron does less well in freeing his wheels from the tracks that lead inexorably towards the outlaw life. We know these things. Nobody needs to talk about them.

The film is little more explicit in its treatment of Chiron’s sexuality. Early on, a neighbour pointedly asks Paula why she thinks the boy gets bullied. The adult Chiron avoids even brief moments of intimacy. The sense is of a vast invisible network of social strictures imprisoning these characters and all the rest of us. American cinema has rarely been so tantalisingly evasive in its engagement with such questions. In this area (and probably this area alone), Noel Coward might approve of Moonlight.

This is not to suggest that the film is oppressive or depressing. James Laxton’s camera is alive to the liquid beauties of Miami. The performances engage so determinedly that one’s attention never wavers. A final moment of quiet connection – scored to beautifully judged doo-wop – confirms that even rough lives can have moments of transcendence. A near-perfect film.

From New Zealand to Saudi Arabia: When women won the vote worldwide
10