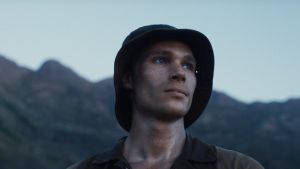 Moffie has an aesthetic sweep to match Céline Sciamma’s swooning Portrait of a Lady on Fire. It is a breath-taking piece of cinema whose beauty heightens the ugliness at the heart of the film.

The year is 1981, and South Africa’s apartheid government is embroiled in a brutal and pointless war on the Angolan border. In common with all white boys over the age of 16, Nicholas Van der Swart (Kai Luke Brummer) is conscripted for two years of national service to fight on behalf of the minority white government against the threat of communism and “die swart gevaar” (“the black danger”).

For Nicholas, the brutality of military training under the sadistic Sgt Brand (Hilton Pelser) is made all the more hellish when he finds himself attracted to rebellious fellow conscript, Dylan Stassen (Ryan de Villiers). Suddenly the training section of Full Metal Jacket seems a lot less stressful.

A chilling flashback to Nicholas’s childhood – in which an unknowing glance at a swimming pool shower – provokes a torrent of homophobic abuse from an adult, dovetails with the narrow, ghastly definition of masculinity found during service.

The loaded word “moffie” – the Afrikaans equivalent of “faggot” – is a tool used to shape and beat the teenagers into a twisted patriarchal, white supremacist ideal. No deviation, even a leftover scar from a removed earring, will be tolerated. Long before he gets to the front, war is hell for the young protagonist.

This Afrikaans bildungsroman, adapted from André Carl van der Merwe’s semi-autobiographical 2006 novel drawn from his experiences as a gay teenage conscript, isn’t an obvious fourth feature for Oliver Hermanus, as a person of colour. But Moffie does build on the film-maker’s breakthrough picture, Beauty, as an excavation on the violent homophobia lurking under apartheid culture.

The film’s silent sensuality echoes the delicate gaze found in Moonlight and Beau Travail. Unlike those titles, the rising sense of panic makes for white-knuckle viewing.