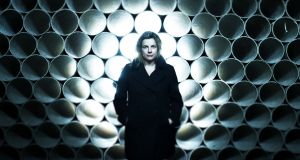 On location: Catherine Geary, who has worked on Star Wars: The Force Awakens, Game of Thrones and Skyfall. Photograph: Charles McQuillan/Pacemaker 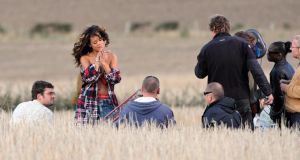 We Found Love: Rihanna making her video in a field owned by the DUP councillor Alan Graham; she took off more clothes than he was comfortable with. Photograph: Press Eye/Rex 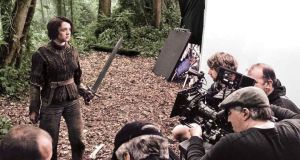 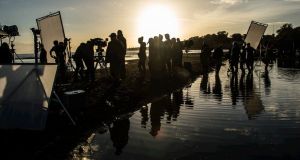 To explain what the life of a film location manager is like, Catherine Geary shows me a sketch on her laptop. Actually, it’s more of a scribble. It looks like a misshapen caterpillar, just a wonky, bristly line, with an arrow above it pointing south.

This is the sum total of her instructions for one project. No words, no direction. It is Geary’s job to take that squiggle and translate it into a real place. She has to find a location that will fulfil a film director’s creative vision, however vague, then pull all the logistical strings to make the shoot happen. It sounds demanding.

“It is,” says Geary, smiling. “Being a location manager is the one job that people in film crews say they would never do. The crew generally deal with other members of the crew. But the location manager deals with the outside world.”

Geary lives with her eight-year-old son in the quiet seaside town of Donaghadee, in Co Down, but job takes her all over the planet, and one day can be dramatically different from the next. She has worked on numerous big productions, including Star Wars: The Force Awakens, Skyfall, Game of Thrones, Dracula Untold, Philomena and Hunger, as well as many smaller, independent films.

“My job can be done anywhere,” she says. “It’s all about detective work and building relationships. But you’ve always got to be on point. Last week I got off a plane from the Arctic, got straight into a car and spent two days showing an American group around Belfast, almost like a tour guide.

“The really interesting part of my job is the instinctive element of meeting someone. You just know what they want, sometimes before they know it themselves. You need that ability to tap into their aesthetic, even when you’ve probably never met them before.”

When it comes to scouting locations, Geary has to keep on looking until she finds what she needs.

“You spend a lot of time with the production designer, driving around, listening to music, looking for places that fit with the concept,” she says. “You need a good pool of reference. You need to know about certain artists’ colour palettes, or, if the designer is talking about Escher or Le Corbusier, you need to be familiar with those names and what they mean.”

That’s the fun part. But then the logistical side kicks in. As well as being able to discuss Beckett or Bauhaus, Geary has to know how to park 40 trucks in the centre of a busy city and get them out again, or how to position a crane in the middle of a forest. Once she had to stage a blood-soaked gun battle in the foyer of Belfast City Hall.

“Ego doesn’t feature,” she says. “As a location manager you’re there first thing in the morning and you’re the last one to leave at night. You’re contractually and legally obliged to leave the location in the same condition as you found it. If we want to film somewhere extreme we need our facilities close by. Sometimes we have to create that space, so we might need to lay a surface that can cope with 20-tonne trucks.”

With Christopher and His Kind, a 2011 BBC drama about the writer Christopher Isherwood, Geary was tasked with helping transform 21st-century Belfast into 1930s Berlin. “It’s not just about diverting buses and other traffic. You also have to engage with the road service and find out about the water-mains repair they have scheduled, all that kind of thing.”

“We had to cover up every single PVC window, remove all satellite dishes and modern cars. Then the director said he was going to film in the opposite direction . . . We are employees; the person who is paying me is the one who makes the decision. I can only advise.”

In September 2011 Geary received a call asking her to find locations in Northern Ireland for Rihanna, the R&B superstar, to make a video for her single We Found Love. “I had only 10 days’ notice,” she says, “and I couldn’t tell anyone who it was. It was all very secretive.”

The director had requested a wild-flower meadow for part of the shoot, and Geary came up with the next best thing: a grain field, in Co Down, with a dead tree standing stark against the skyline. Everything went swimmingly until Rihanna shocked the owner of the field, a farmer and DUP councillor named Alan Graham, by taking off more clothes than he was comfortable with.

The incident made headlines around the world. But, according to Geary, the real problem was that Rihanna and the crew had simply overstayed their welcome.

“It meant nothing to the farmer that this was Rihanna. He just wanted to cut his corn and we weren’t finished. We were supposed to be out and away by 2pm, but Rihanna wasn’t even out of her Winnebago at that point. I spoke to him afterwards – so did Rihanna – and all I could do was apologise.”

For Geary, community backing is vital to any production. “Our industry in Northern Ireland would not exist without local support. I mean the people who let us use their toilets, or who move their cars to make room for us . . . honestly, we don’t exist without that. Whatever the film is, whether it’s Game of Thrones in Ballintoy” – on the Co Antrim coast – “or a tiny independent with no money for anything, it needs community support. And it can’t be overestimated how important that is.”

This ever-changing, all-consuming career wasn’t one that she originally chose. “At first I wanted to be in front of the camera, but then my mum said that Nicole Kidman was doing Broadway for £250 a week and what did I think I was going to get?”

So Geary’s backstage training began in 1998 in Dublin, where she worked on everything from contemporary dance projects to Jackie Chan movies.

“I took anything that was offered,” she says. “It’s only lately, in the last couple of years, that I realised that I never said no to a job. I suppose I’m just hungry. You want to be good at what you do, to learn whatever you can, and immerse yourself as much as possible.”

Managing in a man’s world

In her time in the film business, Geary says, she has worked with just one woman electrician and one woman grip. (A grip is a lighting and rigging technician.) If anything, this has only fuelled her passion, resolve and determination for more women to get involved.

“I saw that a lot of filming was happening in Iceland, so I put the kid in the car and said, ‘Hey, we’re going to Iceland to look for dragons.’ I try to expand my points of reference, understand other countries, speak other languages. I want to be challenged when I get up every morning. It’s like Bowie said: ‘I don’t know where I’m going from here, but I promise it won’t be boring.’ ”

Crom Castle, Co Fermanagh Many properties offer either an interior or an exterior; few offer both. Crom is a rarity. My personal favourite areas are the entrance hall’s stunning main staircase and the famous Crom yew trees by the old castle ruins on the banks of Lough Erne.

Roe River, Roe Valley Country Park, Co Derry I was told about this area by a local fisherman when scouting for a place that could stand in for the source of the Danube river. It’s very beautiful, particularly under the old stone arch bridge. A magical place.

East Belfast Yacht Club My favourite locations change frequently, but this one I drove past every day for years before I had a reason to explore. It’s tucked behind the City Airport, the hulls of the yachts just visible from the road. An old jetty stands high above the mud flats at low tide, which also exposes a wreck to one side. It’s not for everyone, but I love the feel of stillness it has in the middle of roads and airports and heavy industry.

Murlough Bay, Co Antrim Murlough has an otherworldly, Tim Burton quality. I love the approach, its gentleness – then quite suddenly the road hairpins downwards towards the sea, leaving cliff above you. It’s a brutally exposed spot, just east of Fair Head, and it has a barren feel. There are car-sized fallen boulders among twisted foliage, and a truly incredible sea view.

Review: Worth seeing. Which is not the same as saying it was worth making.