After a wayward second instalment, this busy follow-up restores some lustre to the mammoth franchise 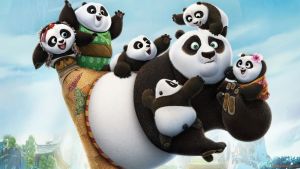 Po (Jack Black), the much-loved ursine atrial artist of the title, is struggling with his new teaching duties in the wake of Master Shifu’s (Dustin Hoffman) retirement. He retreats home to his adoptive father’s noodle shop, only to happen upon Li Shan (Bryan Cranston), Po’s long-lost biological father.

Will the old man be able to teach Po to channel chi against Kai (JK Sions), an immortal villain lately returned from the spirit realm? Will Po be able to turn his newfound panda family – including various adorably voiced Jolie-Pitt children and Kate Hudson’s hilarious ribbon dancer – into warriors worthy to stand alongside such kung-fu masters as Tigress (Angelina Jolie)?

Will there be three more films in this franchise?

Apparently so, but the extended hiatus between Kung Fu Panda 2 and 3 has helped restore some lustre to the sequence following the underwhelming last instalment. Although only fitfully amusing and a little over-populated, Kung Fu Panda 3 is warm big-hearted entertainment.

The lovely emotional ping-pong between Black, Cranston and Hong is only matched by the lovely animation. The Kung Fu Panda franchise has always been a handsome beast, but here the rendering puts Pixar and all other contenders in the shade.

Gaze in wonder at the beautiful woodcut-inspired landscapes, the 2D manga-style flashbacks, and the inventive choreography. Skidoosh, indeed.