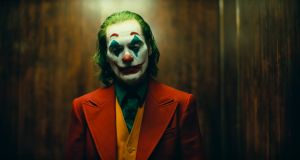 Directed by Todd Phillips, Joker is set for release in October

The trailer for the hotly anticipated Batman spinoff Joker has hit the internet.

Starring Joaquin Phoenix in a role already played by Jack Nicholson and Heath Ledger, Joker has been conceived as a standalone film separate from the DC Extended Universe series.

Set in 1981, and describing the Joker as “a failed stand-up comedian, disregarded by his society, [who] turns to a life of crime and chaos in Gotham City, this origins story is purportedly influenced by gritty urban films of the Martin Scorsese vintage – so much so that at one point Scorsese was attached as co-producer to the project.

Directed by Todd Phillips, Joker is set for release in October. – Guardian