Johnny Depp’s panto drunk pirate is worse than ever

The billion-dollar franchise plumbs new depths of awfulness with Pirates of the Caribbean: Salazar’s Revenge 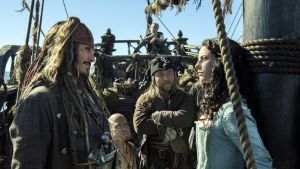 There comes a moment in Pirates of the Caribbean: Alimony’s Revenge when Johnny Depp and newcomers Orlando 2.0 (Brenton Thwaites) and Keira 2.0 (Kaya Scodelario) find themselves being chased by the rotting corpse of a shark.

That’s right. Not content with having figuratively jumped the shark during the muddled Pirates of the Caribbean: On Stranger Tides, this stale, bloated franchise has only gone and killed the fish for good measure. The inclusion of a decaying elasmobranch suggests that the makers of Pirates 5 know full well that the jig is up. But hey, if the last one could muster €1 billion at the box office, who’s to say this vessel isn’t seaworthy?

The filmmakers have, accordingly, opted to half-heartedly put the band back together, by bringing back Geoffrey Rush (again) and by bookending the picture with cameos from Bloom and Knightley. Their presence allows for an equally half-hearted reboot, as Thwaites, as their onscreen offspring Henry Turner,  feebly re-enacts the romance of the original film with Carina Smyth (Scodelario), who is now encased in a Knightley-shaped bodice.

The déjà vu doesn’t stop there: we get a horse-drawn bank being pulled through the streets (they’re robbing a bank, get it?) in lieu of a waterwheel, a (perfectly fine) cameo from Paul McCartney instead of Keith Richards, and Patterson’s Golshifteh Farahani playing the same ill-defined witchy role that Naomie Harris once did.

Anyway, mostly these folks are chasing down Neptune’s Trident as that will allow Will (Bloom) to escape the cursed Flying Dutchman. And then there’s Salazar (Bardem), a crusty undead pirate-hunter who wants Captain Jack Sparrow (Depp) to part with his magical compass so that he and his zombie crew might escape the terrible Triangle of Whatsits. Oh wait, Captain Jack has just pawned said knickknack so that’s that taken care of.

There are lame, crude jokes about bottoms and horologists. There is $230 million of CG effects that never look like anything more than pixels. And then there’s Depp’s panto drunkenness. Or, if those reports that he spends $30,000 on wine every month are true, possibly actual drunkenness.

Even before the allegations of domestic abuse, obscene extravagance, and his vetoing of a female Pirates villain emerged, the actor had proved box-office poison  with a string of flops:  Transcendence, Mortdecai, Lone Ranger, Black Mass and Alice Through the Looking Glass.

In Pirates 5, Depp takes on the same hostage aspect he displayed in the bizarre video apology he made after sneaking his dogs into  Australia. Once the closest thing the film industry had to a rock star, he now looks to be trapped forever under a tricorder hat. Man overboard.