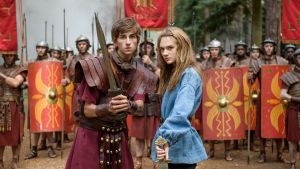 When The Terrible Tudors was published as the first in the Horrible Histories series in 1993, few could have imagined it would would require a certain boy wizard to overtake it as a literary phenomenon. More than 50 titles and 25 million sales later, and Horrible Histories has taken on everyone from Groovy Greeks to Terrible Tudors and Vile Victorians, and spawned a hugely successful children’s TV show, characterised by Pythonesque sketches and silly songs. The goofy energy of the television incarnation makes a seamless transition to the big screen with Horrible Histories: Rotten Romans.

Atti (Sebastian Croft), a brainy Roman teenager accidentally upsets the bratty Emperor Nero (Craig Roberts) and is conscripted and exiled to Britain, an unpopular smudge on the map of the Roman Empire. There, he is captured by Orla (Emilia Jones), a plucky Celt who hopes to join Boudica’s (Kate Nash) revolt. Before we get to the crucial Battle of Watling Street, we meet many agreeable British character actors, a wistful Roman commander (Lee Mack), Orla’s overprotective dad (Nick Frost), and, best of all, a game Kim Cattrall’s Agrippa.

The songs are a bit ramshackle and there are scatalogical jokes that may well date to the period depicted, but there’s an infectious sense of fun and some very good jokes at the expense of pompous Romans and maggoty Celts. In this spirit, cutting edge Celtic medicine involves getting a lick from a wolfhound.

Watch out for Derek Jacobi who hilariously reprises his star-making turn from I, Claudius, and for Ratticus, the furry puppet who separates fact from fiction over the end credits. Who needs to embellish horrible history when there are vomitoria?