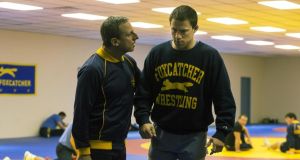 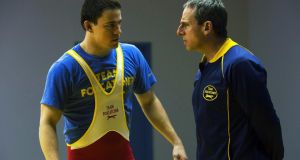 Directing films concerning true-life stories is not the most obvious route to auteur status. Take a wrong turn and you could find yourself chronicling the latest suburban disease of the week.

Yet that is how the singular Bennett Miller has made his successful way. Capote was solid. Moneyball made something compelling of unpromising material (it was as much a business movie as a baseball flick).

Now, he reaches another level with this unsettling study of an extraordinary collision between plutocracy and US Olympic wrestling.

We have already experienced Miller’s way with actors, so the remarkable turns from Steve Carell, Channing Tatum and Mark Ruffalo should not surprise us. What really sets Foxcatcher apart is its unique atmosphere: fetid, blocked, curled up at the edges.

The moral corruption seems to have seeped into Greig Fraser’s cinematography and spread mould to all four corners.

Foxcatcher concerns the relationship between John Eleuthère du Pont (Carell), heir to the titular chemical fortune, and Mark and David Schultz, two prominent wrestlers, in Pennsylvania during the late 1980s.

An apparent schizophrenic with a taste for cocaine, du Pont lived with the illusion that he was an expert in the sport and, by gesturing towards his wallet, persuaded the authorities to allow him to act as Olympic coach.

Reduced to speaking dates at middle-schools, Mark Schultz (Tatum), already a gold-medal winner, requires only mild persuasion to make his way to du Pont’s Foxcatcher estate. David (Ruffalo), his elder brother, is more wary of the enterprise, but eventually signs up for a bumpy ride.

Hitherto supportive of Foxcatcher, Mark Schultz popped up on social media last week to complain forcefully about how he is represented in the picture. It seems that, until critics pointed it out, he didn’t register the hints of sexual tension between his character and Carell’s malign magnate. It is not a flattering portrayal. The talented young wrestler comes across as an inarticulate, socially inhibited youth who is content to suppress any suspicions of impropriety to further his ambitions.

Unrecognisable beneath a prosthetic nose, Carell makes a passive-aggressive Nero of the comically deluded, endlessly powerful du Pont. “I consider us friends,” he tells Mark at one point. “And most of my good friends call me Eagle. Or Golden Eagle.” They don’t, of course. He doesn’t really have friends. He has employees who are required to call him “Eagle”.

A reasonable man, acting as a buffer between a genuine maniac and an intellectually incurious rube, David Schultz takes on the eyes of the audience as we drift towards an inevitable catastrophe. It’s the least showy of the three key roles, but Ruffalo has the ordinary-Joe charisma to make David interesting: he is the only person who knows this world is out of joint.

There is easily enough in that fascinating, unstable triangle to generate the guts of a gripping movie, but a great deal more is going on beneath the surface.

In its sly way, Foxcatcher is a film about the corrupting influence of unchecked wealth. Far from permitting John du Pont an escape from mental illness, the family’s millions have allowed him to turn his delusions into queasy reality. The Olympic authorities play along and contrive in the creation of an absurd charade that, now it is known, brings shame to an emblem of the nation.

Did we say these subtexts go on “beneath the surface”? That’s not quite right. So overpoweringly deadened is the film – yawning gaps punctuate dialogue that stubbornly refuses to overlap – that the action appears to take place deep under murky water. We spend the film with anglerfish while life goes on many leagues above. It is something of a relief to finally surface at the end, but the voyage is certainly worth taking. A glum classic.

The Late Late Toy Show: Everything you need to know
2

Breakfast in Ballsbridge: When Audrey Hepburn met her dad in Dublin
8