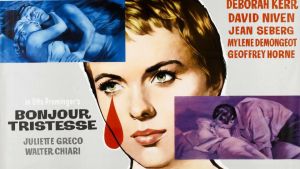 During the 1950s and ’60s, Otto Preminger was one of Hollywood’s most daring talents, a director who didn’t shy away from depictions of drug use (The Man with the Golden Arm), homosexuality (Advise and Consent) and rape (Anatomy of a Murder).

Perhaps Preminger was eclipsed by the Easy Riders, Raging Bulls mob. His last six films (including Rosebud, The Human Factor and the spectacularly out-of-step Skidoo) were all critical and commercial failures. Perhaps it was his cantankerous personality. Or maybe it comes down to his use of rather theatrical tropes in an era increasingly defined by formal experimentation.

For whatever reason, Preminger has never figured in the canon in the way he might have or should have. He’s more likely to be recognised as the Nazi commandant of Stalag 17 or Mr Freeze from Batman than as the film-maker behind Carmen Jones.

Bonjour Tristesse was a typical Preminger joint. In common with much of his output, the film is based on a contemporaneous popular novel and is defined by sexual frictions. An Oedipal drama set on the French Riviera, this 1958 British-US production sees Jean Seberg’s callow Cécile attempting to sabotage the relationship between her playboy father (David Niven) and his possible future wife, Anne (Deborah Kerr).

Anne may be respectable and Cécile may be selfish, but even when the latter takes things too far it’s impossible to dislike Seberg, appearing here, at her malicious best two years before she pixied up Jean Luc Godard’s Breathless.

Seberg and Niven’s queasy daddy-daughter two-step is less explicit than the relationship explored in Françoise Sagan’s novel, but Preminger, ever the sneaky provocateur, lights touch paper before he goes.

Alfre Woodard: ‘I love coming to Ireland, but we’re the pariahs now’
5

Mild-mannered he may be, but Matt Cooper will go 10 rounds with anyone
8