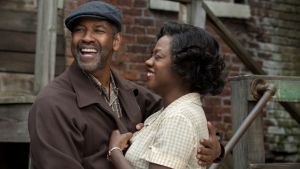 Let us cut straight to the chase. Yes, it can be a problem if a filmed play does little to accommodate the demands of cinema. Few sensible people unaware of Fences’ origins would fail to wonder why the film-makers allowed their actors to spend so much time in the garden. The characters’ determination to speak in huge – albeit beautifully modulated – speeches that tell stories from beginning to end admits the wrong kind of unreality. More damaging still is the reliance on a class of thumping metaphor, both visual and verbal, that causes cinema to grind its gears.

It’s right there in the title. August Wilson’s Fences, a Pulitzer Prize winner in 1983, tells the story of a Pennsylvanian garbage man who has never come to terms with the early termination of his baseball career. Denzel Washington, also the director, plays Troy as an infuriating monster whose charm is only exceeded by his self-absorption. He is a very different man to Willy Loman, but there are, nonetheless, reminders of Death of a Salesman. Rose (Viola Davis), Troy’s wife, is devoted and long suffering. Troy vents much frustration on his son Cory (Jovan Adepo).

With no Cherry Orchard to chop down, Troy spends the play building a fence that could hardly be more baldly metaphorical if it had that m-word written across its slats. There is also a great deal of talk about baseball – second strikes and so forth – that may be teaching us things about life. (The least said about Troy’s brother, a fool who speaks truth, the soonest dispatched from the memory.)

Thanks heavens for those two key performances. Denzel swells with dangerous charisma. Viola works high emotion from every one of her many lines. They are so good they almost convince us we’re watching a movie.

Science and the humanities in the time of pandemic: better together
7 Mrs Kennedy, I presume?
8