Conor McGregor the movie: Dublin fighter on the big screen

A chance meeting backstage at the Late Late Show led Jamie D’Alton to make Notorious, the movie of McGregor’s rise and rise

The official trailer for "Notorious", a documentary that looks at the life and career of Irish MMA star Conor McGregor has been released. Video: Universal Pictures 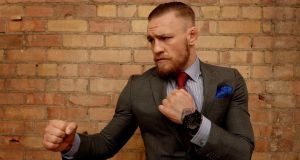 Conor McGregor in a fashion shoot for The Irish Times in 2014. Photograph: David Sleator

Jamie D’Alton’s introduction to Conor McGregor is probably the same as most people’s. It came via the Late Late Show.

D’Alton had produced a film called The Gambler about John O’Shea, an accountant who jacked in his career to play poker. O’Shea was being interviewed on the Late Late Show in 2013, and backstage he and his team bumped into a 24-year-old fighter on the make called Conor McGregor.

Friends of D’Alton who were filming McGregor had previously alerted him to the fighter. “They were filming this guy ‘who was going to be a super star’. And I thought, ‘yeah of course he will’,” he says now, laughing at his own mistake.

On the strength of McGregor’s Late Late performance, and their backstage chat, they set up a meeting on Monday, “we pitched it on Wednesday, and it was green lit on Thursday”.

D’Alton and director Gavin FitzGerald have been working with McGregor ever since. A TV film followed, and a six-part series, which shadowed McGregor as he took a title shot at the 145lb division of UFC.

“Conor was always about, I hate to say building a brand, but he always knew it wasn’t enough to be a good fighter; you have to be more than that,” D’Alton says.

He tells a story about UFC owner Dana White describing his first encounter with McGregor. “White says, ‘He’s the only guy who the first time I met him, he already had a documentary crew following him round’,” he says, laughing at the memory. “Conor’s always going that bit more; he’s a genius for it.”

This new film begins before McGregor has made his mark on the UFC and goes all the way through to the boxing match with Floyd Mayweather in August this year. “We made a big effort to make sure we didn’t want to go over old ground,” says D’Alton. The film is not, he insists, a retrospective look at McGregor’s achievements to date. Instead, it’s “all done from the perspective of the here-and-now; you’re with the team on the rise up”.

Access was crucial and D’Alton is full of praise for the endless hours of work put in by director Gavin FitzGerald and his crew. “Conor’s standards are really exacting. He demands the highest of himself and expects that from the people around him. I’m speaking from a distance, I’m producing the documentary, I’ve been to all the fights: just to see the team around him, there are no shortcuts taken. We had to do the same in terms of making the film. The lads are there so long they are almost part of the camp. We got to the level where he forgot they were there.”

McGregor’s daily existence, though, was not without its challenges. “Conor also has a different routine to the rest of the world. He’s up most of the night and sleeping most of the day.”

McGregor has had plenty of Hollywood suitors, but so far he has stuck with his original crew. “The best thing about Conor is his loyalty,” says D’Alton. “The amount of offers he’s getting now and he stayed with us and trusted us. He’s so loyal to the people he came up with.”

As for McGregor’s immediate plans, D’Alton is as in the dark as anyone. “Maybe the trilogy with Nate Diaz; maybe he’ll defend those belts. [But] this story is just going to keep going and going.”