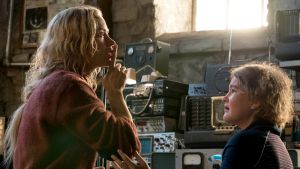 Emily Blunt and Millicent Simmonds in A Quiet Place

It turns out that John Krasinski, the likeable star of The Office (US) and Away We Go, has been holding out on us. How else might one explain this perfectly calibrated, high-concept dystopian thriller, his third outing as a writer-director?

In a post-apocalyptic world, cobbled-together headlines and notes reveal the presence of an alien invader, one that hunts by sound.

This big idea demands a near wordless drama as this thriller joins such fine, quasi-silent contemporary efforts as All Is Lost and The Tribe.

A nerve-racking overture follows a family as they tiptoe stealthily through abandoned streets and stores in search of medicine. While mother Evelyn (Blunt) searches soundlessly around shelves, father Lee (Krasinski) takes a rocket toy away from the youngest of his three children just before the sound effects kick in.

We soon learn that this family had something of an edge on the mysterious creatures that have depopulated the planet: the eldest daughter, Regan (the remarkable Millicent Simmonds) is deaf. Sign language has allowed them to communicate in their remote, survivalist-friendly farm, while others have perished.

The location and different abilities bestowed by the presence of Simmonds’s character locate A Quiet Place somewhere between the post-horror of The Witch, and the woke-horror of Get Out.

Months pass as a terrible tragedy eats at the family, straining relations between father and daughter in particular. Their silence now serves purposes other than continuance. Still, they beat on. Evelyn, who is pregnant, prepares for the birth by assembling a soundproof box and an oxygen mask. Lee schools Marcus, his son (the convincingly nervous Noah Jupe) in hunting and fishing. The independent-minded Regan, meanwhile, is left increasingly to her own devices.

In common with Trey Edward Shults’s criminally overlooked and similarly themed It Comes at Night, the family’s studied isolation can’t last. Marco Beltrami’s low-frequency score warns of catastrophe long before it arrives. For a silent film, the sound design can get awfully loud and alarming. Heather Loeffer’s clever set decoration thinks through every muffled detail: knitted counters for a board game, sand trails and layers of newspaper on every wall.

Working against the grim circumstances of the film’s world, Danish cinematographer Charlotte Bruus Christensen (The Hunt) opts for dappled sunlight and idyllically verdant cornfields around the family’s post-Edward Hopper homestead.

The cast still have much heavy lifting to do: real-life couple Krasinski and Blunt make for attentive, frantic, and impossibly burdened parents to the superb younger stars. The film’s nail-biting tension makes for pleasing genre thrills and a conduit for parental anxiety.

As good a film as you’ll see this year.

Donald Trump: ‘You meet a woman. In one second, you know whether it’s going to happen’
7