From Kong: Skull Island and The Jungle Book to The Planet of the Apes – the influence of Kurtz is everywhere 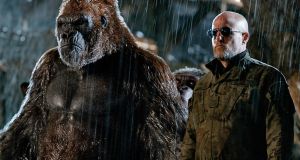 It's a jungle out there: Woody Harrelson (right) in War for the Planet of the Apes (2017)

No, he isn’t. He’s never been more alive.

The words appear towards the end of Joseph Conrad’s now-unavoidable 1899 novella Heart of Darkness. They also turn up as the epigram to TS Eliot’s The Hollow Men. When that poem was published in 1925, the reference was almost as obscure as the lumps of Sanskrit in The Wasteland. Conrad’s reputation was assured, but even he did not rate Heart of Darkness that highly.

Orson Welles attempted an adaptation in the 1940s. It was not, however, until the 1960s that the text became a controversial core text of post-colonial studies. Some see it as an indictment of the imperial urge. Others reel from the dubious depiction of Africa as barbarous complement to European civilisation.

Not every film enthusiast will know of Lord Jim. There’s a perfectly decent 1965 adaptation of that Conrad book starring Peter O’Toole, but the character has not quite entered the Cineverse’s Great Hall of Heroes.

Those enthusiasts know who Kurtz is. In the portly, shiny form of Colonel Kurtz, he dominates the last act of Francis Ford Coppola’s Apocalypse Now. The Vietnam saga’s rise to cultural ubiquity is scarcely less remarkable than the ascension of its distant source. Though it won the Palme d’Or at Cannes in unfinished form in 1979, the Coppola film – hammered together after a famously troubled production – opened to decidedly mixed reviews. The ending seemed uncertain. The voiceover felt portentous. Wasn’t there too much of The Doors about the place?

Over the past year-and-a-half, we have been offered copious evidence of Apocalypse Now’s indelible influence. And it’s all to do with apes.

In Disney’s recent, excellent retooling of The Jungle Book, King Louie has become a colossal, even more slurred version of Colonel Kurtz. Voiced sinuously by Christopher Walken, he occupies almost every cubic centimetre of a vast, abandoned temple.

Rudyard Kipling, author of The Jungle Book, would, no doubt, be deeply confused by the insertion of a character derived from an American film based on a novella by a Polish sailor who became a distinguished Englishman. The outsider’s eye is so often the keenest. No better character exists to personify the otherness at the heart of dark foreign spaces.

The influences are even more prominent in this year’s amusing Kong: Skull Island. Something awful is lurking on a tropical island in the later years of the Vietnam War. A team is assembled. They climb into helicopters and fly fearlessly towards what proves to be yet another giant ape.

Strong odours of Apocalypse Now stream all the way through the shamelessly gung-ho follow-up to the most recent incarnation of Godzilla. The homage is at its most shameless when the helicopters blast power chords while closing in for the attack. It’s Black Sabbath rather than Wagner, but the reference is clear enough.

Tom Hiddleston’s character is named for the author of Heart of Darkness. They meet a lost American airman (John C Reilly) who, like the hero of that novel, sweats under the name Marlow. As I noted at the time, Skull Island and Apocalypse Now should just get a room together.

There’s more. Next week, we get the third film in the superb reboot of Planet of the Apes. Dawn of the Planet of the Apes, the previous film in what looks like a trilogy, had already travelled down this gloomy, malaria-ridden river. In that episode, the more demented apes looked like the stand-ins for Kurtz.

In War for the Planet of the Apes, we are in no doubt that Colonel McCullough – given sombre presence by Woody Harrelson – is the descendent of Conrad’s demented ivory trader. The things he has done and the things he has seen have driven him to the point of tyranny. Telling graffiti points us in the direction of the 1979 film.

What is going on here? None of these three films makes any serious effort to address post-colonial issues. None engages with the existential desperation that propels Kurtz towards derangement. Coppola’s ultimate influence is upon the visual and the sonic. These films lean towards the superficial aesthetics of Apocalypse Now rather than towards its muddled, sometimes sophomoric philosophy.

The associations borrow a demonic weight from their influence – without that link, the new King Louie is scarcely more scary than the 1967 version – but the ape movies are more interested in the ghastly khaki cool of that strange, strange film.

Apocalypse Now defines bad jungles. That’s all right. Coppola derived much of that look and sound from Werner Herzog’s Aguirre: The Wrath of God. Nothing much is new in this art.