Cannes 2013: all cinematic life is here

From its all-star cast and super-yacht backdrops, to the grit and grime of its underground market, Cannes is still the world’s most important film festival 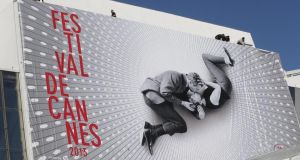 Cast a quick glance about Cannes tonight and you could be forgiven for deducing that Hollywood bosses the world’s greatest film festival. For the third year running, American movie stars appear on the ubiquitous poster. In 2011, Faye Dunaway stared down from the Palais des Festivals’ vast frontage. Last year it was Marilyn Monroe. This year we are, at every corner, greeted by a genuinely gorgeous image of Joanne Woodward entwined with her late husband Paul Newman.

The opening film – although filmed in Australia by Australians – is an American epic that has already received uneven reviews and achieved impressive box-office returns across the Atlantic. The Great Gatsby (playing out of competition) follows in a line of opening films that takes in such unlovely projects as The Da Vinci Code and Robin Hood .

Out in the Mediterranean, The Seven Seas , a 28-storey-high yacht, looms menacingly amid equally massive vessels. This is the travelling mansion of Steven Spielberg, who serves as the president of this year’s jury.

Don’t be fooled. For all the American glitz on display, Cannes remains the natural homeland of world cinema. This is one of the few events left on the planet that can turn a struggling art-house director into a star. In the opening few days, the main competition will screen: Jeune & Jolie , the new picture from prolific Frenchman François Ozon; Heli , the latest from Mexican wiz-kid Amat Escalante; and The Past , Asghar Farhadi’s follow-up to his adored A Separation . Brows will be furrowed in the yawning valley of staircases that sits between the huge Salle Debussy and the huger Grand Auditorium Louis Lumière.

Most press attention will, however, still focus on the English-language films. The Coen brothers and Steven Soderbergh are both previous winners of the Palme d’Or, the top prize in the principal competition. The former return with Inside Llewyn Davis , a comic drama set among the New York folk boom of the early 1960s. Soderbergh directs Michael Douglas and Matt Damon in a study of Liberace – originally made for cable television – titled Behind the Candelabra . Both look a tad lightweight to take the most important gong. Roman Polanski, another former Palme d’Or holder, directs a version of a chamber play entitled Venus in Fur . That film doesn’t sound like a major contender either.

Although busy for decades, Nicolas Winding Refn broke out at Cannes in 2011 with the greatly admired Drive . His follow-up, Only God Forgives , reunites the Dane with Ryan Gosling for a tale of violent skulduggery in Bangkok. The world waits in greedy anticipation.

Other hot directors competing for the Palme d’Or include Jim Jarmusch (vampires lurk in Only Lovers Left Alive ), Alexander Payne (road trips in Nebraska ) and, from Chad, Mahamat-Saleh Haroun (petrol smuggling in Grisgris ).

There is no clear favourite among that bunch. In the past, it has proved impossible to draw any significant conclusions from the make-up of the jury. Spielberg and fellow judges such as Nicole Kidman and Christoph Waltz will, no doubt, wish to enter into the spirit of the place and approach the austere African dramas with the same open mind they bring to the American comedies. One wonders if the fact that only one female director – Valeria Bruni Tedeschi – made it into the big race will spur some uncomfortable conversations over the dinner table.

Second-tier stunners
Forget the big show. As ever at Cannes, you could knock together an extraordinary festival – still better than any other in the world, perhaps – from the films playing in the sidebar events.

Un Certain Regard (UCR), the official second-tier, kicks off with an outing for Sofia Coppola’s The Bling Ring . The American director’s fourth picture concerns a gang of real-life tearaways who, after tracking their targets’ activities on the internet, burgled the homes of celebrities such as Paris Hilton and Lindsay Lohan.

Also worth noting is the latest project from the busiest polymath on the block: James Franco directs (who else?) himself in an adaptation of William Faulkner’s As I Lay Dying . As ever, Un Certain Regard kicks up a series of films from first-time directors, any one of whom could become a Cannes regular. The formidable Claire Denis brings a more familiar veteran presence to that competition with Les Salauds . Did she specifically ask to be included in the funkier UCR? An appearance by Denis in the official strand would have deflected some of the accusations of sexism.

There is Irish interest in the prestigious, semi-official Directors’ Fortnight strand, which plays along the bay at the Théâtre Croisette. (The event emerged from the political chaos that led to the cancellation of the 1968 festival.) A little over a decade ago, Ruairí Robinson secured an Oscar nomination for his work on the animated short Fifty Percent Grey . Now, his feature debut, Last Days on Mars , will feature at the Fortnight and launch the next stage of his career with a mighty flourish.The film, co-produced by Irish company Fantastic Films using funding from the Irish Film Board, is a science-fiction drama featuring Liev Schreiber and Romola Garai.

Adventurous punters who make their way to the Théâtre Croisette can also greet the reappearance of the great Chilean director Alejandro Jodorowsky for two documentaries. Jodorowsky’s Dune follows the film-maker’s unsuccessful efforts to film that Frank Herbert novel (David Lynch later brought it to the big screen). Jodorowsky also directs a film about his own life called The Dance of Reality . The man behind El Topo and The Holy Mountain is sure to receive an emotional welcome.

All the above will, however, be of little interest to a large portion of those attending Cannes. Beware stray news stories reporting that Bruce McHackenstein’s Killer Octopus Redux is screening “at Cannes”. While the various competitions play out above ground, hundreds of films – some good, many bad, quite a few unfinished – will be flogged ruthlessly in the many-layered bunker that contains the Cannes Market. Screech at the latest Bulgarian variation on The Creature from the Black Lagoon . Sneak quietly past the Hungarian rip-off of Finding Nemo . Chortle at the Panama Film Commission’s efforts (this was a real thing last year) to flog parts of their country as versions of New York, Luisiana and, yes, Ireland. Mind yourself, Panama. We have our own crumbling arches.

All cinematic life is here. Let the aggro begin.