Sometimes fiction is better off sticking to the facts 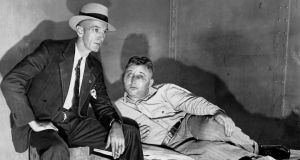 Harry Powers, born Herman Drenth, unassuming although skilled at turning sugary phrases to capture the heart of despairing middle-aged women, was a convicted serial killer. His crimes took place outside a little town in West Virginia near the beginning of the Great Depression.

The American writer Jayne Anne Phillips, who was born and raised in West Virginia, heard about how the widowed Asta Eicher and her children were brutally killed, from her mother, who in turn had been told about it as a six-year-old child by her mother, Phillips’s grandmother. It happened in 1931 and Phillips’s mother could recall being hurried past the scene as souvenir hunters searched through the deserted buildings. It is a shocking story, but Phillips has taken the facts and attempted to shape a memorial to the victims.

There are elements of Truman Capote’s In Cold Bood (1966) in its concept, yet in execution Phillips is far closer to Daniel Woodrell’s eerily evocative and immensely superior The Maid’s Version (2013) which is also based on a true-life happening, a devastating Missouri dance hall fire.

Having previously alluded to the Eicher case in her brilliant debut novel Machine Dreams (1984), this new work does appear with the promise of something special. It opens well: Phillips has given the novel a poignant centre through her depiction of the youngest of the slain Eicher children, little Annabel, a fey dreamer given to writing pageants and plays.

The novel is also dedicated to her memory and it is Annabel who elevates the book in its rare moments of strange beauty. “When the year turns, there are bells on the wind. All the old years fall on the ground in lights . . . My grandmother said there was a whisper for each one dead that year, and a feather drifting for each one waiting to be born.”

Annabel sets the scene; she describes her family’s life in Chicago and the changes that followed her father’s death in a street car accident. The child mentions her brother’s dog, Duty, who had come to them from the pound, because “he’d lost his family in a tornado”.

Phillips also creates a convincing portrait of the mother, Asta, who, having survived the threat of her husband leaving her for another woman, had been repeatedly compromised by the marriage. His death frees her only to leave her to face worse fears of poverty. Her efforts to save her family and prevent the bank from taking her home end in tragedy with the arrival into their lives of Powers, who had rejected the life of an immigrant father as pursued by his father, a Dutch man who came to America determined to work hard

It is dramatic as an eloquent lamentation not only for the victims but also in highlighting the plight of women at the time. When Phillips is good, she is very good and Quiet Dell does achieve a vivid sense of time and place. She is also alert to the moral ambivalence that undercuts human behaviour. Asta, already damaged by her husband and undermined by his domineering mother, the grandmother who fills little Annabel’s mind full of ghosts, appears sufficiently desperate to believe a stranger’s promises. She actually sets off with him to view their new home. The stranger then returns alone to collect the children, fails to empty Asta’s meagre bank account, yet undaunted packs everyone, except the family dog, into his car and drives away.

All downhill
In the portrayal of William Malone, the sympathetic bank manager, the narrative begins to falter. Is he a champion or a coward? What exactly are his concerns? The strong beginning in which Phillips, whose debut collection, Black Tickets (1978) caused Nadine Gordimer to describe her as the best short-story writer since Eudora Welty, succeeds through its daunting grace. It is a child’s interpretation of her world. Her grandmother had told her: “Your dreams see past us.”

Asta took in lodgers. One of them was a young man named Charles O’Boyle. He loves her and wishes to be with her. It is a genuine affection, not sexual. The crime is real, as are the killer and his victims.

The story needs to be told and to do so Phillips introduces a Chicago Tribune journalist to investigate it. The reporter is invented; she is also a woman with an unlimited expense account and no editor. This is 1931, years before television drama introduced beautiful, independent and invariably troubled female detectives to lead murder cases. Emily Thornhill is intrepid, appears to file every few pages and also falls in love at first sight with the bank manager.

Phillips permits a powerful real-life tale revisited to become submerged by the cloying love affair flourishing between the reporter and the bank manager whose personal situation is a variation of Mr Rochester’s.

Even as a portrait of a hard-headed pioneering career woman, Emily Thornhill fails to convince. She also enjoys a chummy relationship with Eric Lindstrom, her attractive and confidently homosexual colleague, a respected photojournalist. Again this is 1931 and taking place in a very different America. Emily’s use of language becomes increasingly stilted and formal – at times she sounds as if she may have wandered in from a 19th-century novel.

The sexual engagement with the bank manager is frenetic yet Emily also remains alert to the attractions of Sheriff Grimm who is running the case back in Virginia. The love plot quickly becomes tedious. Still, in stories such as this there is always the trial and court room scenes do tend to provide useful narrative tension. The cross-examination comes complete with the expected theatrical rhetoric and the villain’s calm sneers.

Whenever the sensations of little Annabel’s still lively mind flicker into the narrative in the form of a ghostly voiceover, the narrative mood softens to lyricism only to be weakened again by the unconvincing Emily. Eventually her bank-manager lover gives her a little purse, which is stolen by a pickpocket. Our reporter sets off in pursuit, catches the thief and then offers him a job as her archivist. The 12-year-old street urchin takes up residence in the hotel. Every lie that Emily spins is accepted and her efforts on his behalf are beyond implausible.

Historical fact is the powerful source material: the cruel premeditated murders of women - and, in the case of Asta Eicher, who was betrayed by her husband, betrayed by her hopes of something better - of her children. Ironically Phillips, who has so often proven how astute an understanding she has of human suffering and emotional pain, has created an uneasy mix of fact and fiction. Only Annabel, the real-life little girl who died in terror, convinces.

Quiet Dell is a touching memorial and fascinating evidence of the way in which memory and story linger. Yet as a novel it splinters at the point in which fact yields to melodramatic invention.