Shine on: 1,600 years of Irish Christianity

Treasures of Irish Christianity Volume II, A People of the Word, edited by Salvador Ryan and Brendan Leahy 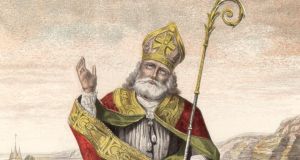 Treasures of Irish Christianity defies easy description. It is at once a book of articles with a strong historical bent and a miscellany of devotional or contemplative essays. Seventy-three authors, many of them well-known scholars, provide pieces on many aspects of Irish Christian tradition and belief. The book shines a light on well-known and on comparatively obscure episodes in the history of Irish Christianity from the Conversion, through all the vicissitudes of medieval times to the present day. The contributors appear to be mainly (Roman) Catholic or to hail from that tradition but there are notable contributions from members of other Christian churches. The writers have been kept on a tight leash – contributions are very short – but this is a successful strategy and the succinctness imposed by the editors benefits the reader. Think of the chapters as opening doors to fields of knowledge and not as comprehensive statements. The book is divided into four parts – Foundations, Flowerings, Fragmentations and New Realities – but these are permeable boundaries and some essays could fit easily into more than one category. The scope is very wide – from early Irish manuscripts and high crosses to modern literature – Joyce and Neil Jordan figure as well as the animated film version of Give Up Your Aul Sins and so does blogging. Not all are academic, there are several personal reflections. We learn about the origins of the “Missions” which were such a prominent feature of Irish life until recently and of the bible war of the 19th century. Discovering the signing choirs of deaf children was a particular pleasure for this reader as well as learning of the Franciscan scholar, Maurice O’Fihely (died 1513), professor at Padua University and publisher of editions and commentaries on the works of John Duns Scotus and corrector of texts for some of the great Renaissance printer-publishers of Venice.

Sacred scripture lies at the heart of the book but its expressions in music, the visual arts and literature and even the folk tradition are celebrated. In Foundations, David Kelly introduces St Patrick’s vigorous prose and his use of biblical quotation and allusion. Martin McNamara writes on the Bible in early Ireland and also on Irish apocryphal literature. Thomas O’Loughlin contributes an intriguing piece on mapping the Book of Joshua in which he proposes that two 9th-century continental manuscripts are copies of a lost Irish original: in one of them there is a map of Palestine which marks “cities of refuge”, a subject of great interest to Irish (but not European) canon lawyers of the era. There is evidence that Irish churchmen thought of their ecclesiastical foundations as just such cities.

There are three chapters on aspects of sculpture in early Ireland: Peter Harbison writes on the representation of John the Baptist on Irish High Crosses, Mary O’Brien offers an interpretation of the Kilnaruane (Bantry) pillar and Finbarr Clancey of the great cross of Moone, Co Kildare. The crosses were expressions in stone of scripture and evocations of the divine and can be read like books.

Timothy O’Neill explains the deep devotion to the psalms in the early Irish church and their use as a medium of teaching. The earliest surviving book in Ireland is the Cathach of St. Colmcille (c 600 AD): it is a psalter or book of the psalms. The Springmount, Co Antrim wax writing tablets, probably of 6th century date, were found in a bog. This is the oldest manuscript of any kind that we have in Ireland. Scratched on the wax with a stylus is part of the text of the psalms, probably the exercises of a student who was learning Latin by copying them. We learn too of the philosophy of Johannes Eriugena and of Sedulius Scottus who was rediscovered as an Irishman in early modern times. Diarmuid Scully discusses St Bernard of Clairvaux’s Life of St Malachy of Armagh. To highlight the achievements of his subject as a reformer of the Irish Church, Bernard had to characterise the Irish Christians as a pretty degraded lot, a literary conceit which did the Irish no favours with the Papacy. If anything, it bolstered the case in the 12th century for encouraging Henry II to “reform” the Irish church. The period described as “Foundations” could well be described as “Flowering” because of the quite extraordinary creativity and achievements of Irish Christianity in the period from about 600 to about 1100 AD.

There is much to learn and enjoy elsewhere: music in the liturgy, scholarship, art, Bedell’s Irish translation of the bible and modern developments in the church. There are two articles also on the (pace one contributor really rather well-known) biblical and Syriac manuscripts in the Chester Beatty Library.

There are personal meditations of many kinds and perspectives. I will choose two out of many which should resonate with contemporary readers. Patrick Comerford’s elegant essay on the religious aspects of the Celtic Revival sets out the historical context for the adoption of “Celtic” Christianity as a foundational identity for the Church of Ireland after disestablishment in 1869. He might have gone a step further and attributed the invention of the “Celtic” Church to Anglican divines and especially to FE Warren’s book of 1881 on its liturgy and ritual. Celtic spirituality is now a lifestyle choice with New Age overtones but a Celtic Church never existed – the ancient Irish and British churches were within a range of variation of practice widespread in early medieval Europe: standardisation on the Roman model came late and slowly.

Crawford Gribben charts the contribution of 19th-century Irish protestant clergy to the development of a theory of the end of the world (“dispensational premillennialism”) which embodies a set of beliefs about Israel and the Middle East and of how the end of times will play out. Their apocalyptic vision has become widely influential and has been shared by many, including, recently, key decision-makers in the United States. Scary stuff.

The people of the Word in this case are Christian. Other Peoples of the Book, Jews and Muslims, are mentioned in passing but that is not a criticism. This volume wears its heart on its sleeve and it does what it sets out to do. It celebrates Irish Christian belief, tradition and practice over almost 1,600 years. It can be read with pleasure both for its cultural and confessional content.

Michael Ryan was director of the Chester Beatty Library.