Poems about pets and (human) predators 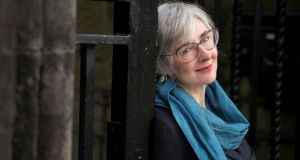 Amanda Bell: that the sentience of animals is currently a matter of debate makes it timely to reflect on our complex and contradictory relationships with the non-humans with whom we share the planet

We inadvertently reveal ourselves in our writing, possibly more so in the case of poetry than any other genre. It can be both alarming and enlightening to see preoccupations leap out from between the pages of a book when perhaps we thought we were being oblique in individual poems. As both a lifelong animal lover and a researcher with an ecocritical perspective, it is perhaps not surprising that the human/animal relationship is a pronounced strand in my debut collection First the Feathers (Doire Press). The very fact that the sentience of animals is currently a matter of debate makes it timely to reflect on our complex and contradictory relationships with the non-humans with whom we share the planet. It is in this context that I examine the portrayal of the human/animal relationship in the collection.

Many would argue that the primary relationship between human and animal is a culinary one. The cover image of arrowheads, described in my poem Points (which was shortlisted for the Irish Poem of the Year 2017), attests to millennia of humans hunting animals for food. Its companion piece, the title poem First the Feathers (winner of the Allingham Prize 2015), is a meditation on the ethics of eating a game bird. The argument develops by touch, as the act of prepping a woodcock for the table brings up a series of haptic associations in an attempt to understand the true significance of the act. The imagery proceeds from an evocation of the still-lives of the Dutch masters, to the desecration of breaking the spine of a book, to the final image, suggestive of infanticide.

However, the relationship between food and prey isn’t entirely one way. Elsewhere in the collection, I have tried to position the human as an interdependent link in the circle of life. Burren Vulture was inspired by a talk about the crucial role played by vultures in the disposal of human bodies in the Zoroastrian Towers of Silence. This seems like such an ideal ecological solution to the disposal of bodies – no embalming, no toxins from crematoria chimneys, no land use required – perhaps Dublin’s voracious gulls could be put on to the job? However, the catastrophic decline in the vulture population – caused by unregulated use of veterinary medicine – has led to a significant carrion disposal problem. Vulture survival now requires conservation measures, and their place in the food chain is already being filled, as packs of wild dogs roam the Nepalese countryside.

Critics have noted the parallels between the exploitation of female and nonhuman bodies. A lack of empathy with other sentient beings makes this exploitation easier

Ecofeminist and intersectional critics have noted the parallels between the exploitation of female and nonhuman bodies. A lack of empathy with other sentient beings makes this exploitation easier. This is alluded to in Cockle Picking, the story of an encounter on a deserted beach, which begins with a description of collecting cockles and culminates in an assault. The juxtaposition of the addressee of the poem with the cockles themselves – vulnerable creatures both, is an attempt to bridge this interspecies divide.

The role of animal as totem is central to Crow, but it is as companions that animals come most sharply into focus in the collection.

In 2010 I had the great pleasure of spending several months in the company of the late Maurice Craig, as editor of Photographs (Lilliput Press), his last book of architectural photographs. As well as his many erudite and celebrated publications on Irish buildings and book-bindings, Maurice edited an anthology of Poets and Their Cats (Lilliput, 2002), the introduction of which attests to the long relationship between the two, from the eighth-century scribe who found his counterpart in Pangur Bán, to Baudelaire, according to whom only lovers and scholars could truly empathise with cats, as friends “both of learning and of wantonness”.

My collection, like many others, is dedicated to the memory of a pet, in this case our cat, Albus. It seemed fitting, given his overseeing, over several years, of the entire collection, lying on lap or keyboard as the mood took him. I also included an elegy for him.

To elegise a pet is a not uncommon undertaking for poets. Like all animal lovers, poets strive to convey the genuine bereavement experienced on the death of a pet against a backdrop of Cartesian logic, which dictates that they are mere machines. This internal conflict is widely explored, from Louis MacNeice’s celebrated On the Death of a Cat, to Shallow Grave in Brian Kirk’s recently published After the Fall, and is clearly articulated in John Gallen’s Lines on the Death of a Cat: “This is the stammering sincerity of the humbled./ It is important that you should not laugh – /Some life that loved me is sordidly ceased.”

There is also a gender bias to the animals we admit to loving and mourning. Women may shy away from the caricature of “mad cat lady”, and even for men, as Craig points out, cats are a more ambiguous choice of companion: “If you want to be reassured that you are no end of a fine fellow, keep a dog.” A cat is a much more complex option. In his introduction, Craig argues that “more than other animals, cats force us to consider our place in the scheme of things”. And there is the rub. Observing the mass extinctions of our time, no one with a shred of empathy can suppress a shudder. This consideration of our place in the scheme of things underpins Troglodytes, which was written after a visit to the Lascaux caves. It was an intensely hot summer, and insects in their millions were taking refuge from the sun, burrowing into every dark, cool space. It seemed to me that these insects had watched the original artworks being painted 17,000 years ago, seen the cave falling out of use and witnessed its rediscovery, and that they would probably outlast us all.
First the Feathers by Amanda Bell is published by Doire Press